A new type of “triggered imaging” technology enables University of Alabama at Birmingham physicians to better target tumors during radiosurgery and lessens the risk of injury to surrounding lung tissue. 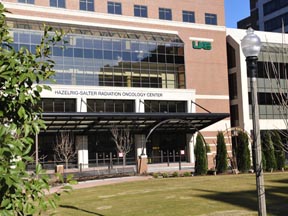 Radiosurgery is a focused, highly targeted, high dose of radiation treatment typically taking three to five sessions, as opposed to 25 to 30 sessions for conventional radiation therapy. It is used in very small, inaccessible cancer sites such as those in the brain, lung, liver and pancreas.

Doctors at UAB used triggered imaging for the first time earlier this month when performing respiratory-gating radiosurgery treatment for an inoperable early-stage lung cancer case. Respiratory gating turns the treatment beam on and off in synchrony with the patient’s breathing to increase treatment precision. Now it also can trigger an imaging system to obtain an X-ray of the targeted tumor when the beam is turned on, potentially increasing the accuracy.

“With this technique, we now can monitor the gating accuracy and ensure that the beam hits the tumor,” said Richard Popple, Ph.D., associate professor of medical physics in the Department of Radiation Oncology at UAB. “It will enable us to monitor tumor position in real time and intervene if a change in the respiratory pattern causes a shift. The enhanced precision could potentially increase tumor control and decrease the amount of surrounding healthy lung tissues exposed to the beam.”

Triggered imaging, or infraction motion review, is a new capability of the TrueBeam linear accelerator, created by Varian Medical Systems.

“The IMR tool offers us a way to verify that our gating strategy remains valid throughout an entire treatment,” added Chris Dobelbower, M.D., Ph.D., assistant professor in the Department of Radiation Oncology at UAB. “It also gives us the ability to hold the beam should the target wander from isocenter if the patient’s breathing pattern were to change due to a cough, sneeze or other interference.”

To use IMR during the treatment for lung cancer, Dobelbower collaborated with thoracic surgeon Douglas J. Minnich, M.D., assistant professor of surgery at UAB, who placed a set of markers into the lung tumor using an approach that employs three-dimensional CT imaging to guide the procedure. These markers made it possible to see the tumor’s location within the surrounding healthy tissues using X-ray images generated during treatment.

According to Dobelbower, the ability to generate an image with every breath, identify when a targeted tumor has shifted, stop a treatment and reposition the patient makes a new level of precision feasible. “This previously was only possible by a time-consuming and cumbersome process of interrupting treatment for additional imaging,” he said.

The clinicians are hoping that if the IMR tool proves to be successful in lung-cancer cases that it also can be extended for use in liver-cancer tumors.

Popple has been a paid speaker for Varian.