Cystic fibrosis drug may be useful for treating COPD in smokers

A new drug that improves lung function for some patients with cystic fibrosis may also help treat smokers with the incurable lung disease COPD.

A drug developed to treat certain strains of cystic fibrosis may be useful in the treatment of chronic obstructive pulmonary disease, one of the most common lung diseases, which is seen frequently in smokers and has no cure. The findings were published online Friday, June 29, 2012, in the online journal PLoS ONE by researchers at the University of Alabama at Birmingham. 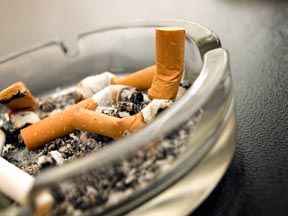 Smokers with chronic obstructive pulmonary disease have problems with the accumulation of mucus in their lungs, which leads to chronic cough and sputum production and increases the risk of hospitalization and death, according to Mark Dransfield, M.D., medical director of the UAB Lung Health Center and co-author on the article. These symptoms are similar to those seen in patients with cystic fibrosis who are born without a protein needed to keep their airway hydrated and free of mucus, called the “cystic fibrosis transmembrane regulator” protein.

“We found that cigarette smoking reduces the activity of CFTR both in the lab and in human volunteers who smoke and have COPD,” Dransfield says. The researchers showed that a new drug recently approved by the FDA for patients with certain types of CF, called ivacaftor (known by its brand name Kalydeco, VX-770), activated the protein and normalized airway hydration and mucus clearance. “This sets the stage to test the drug in clinical trials in patients with COPD to see if they would benefit.”

“Our studies demonstrate that cigarette smoking causes an acquired abnormality of mucus clearance that is mediated through CFTR, and that this pathway can be pharmacologically reversed in the laboratory by drugs that activate CFTR,” says Steve Rowe, M.D., assistant professor in the Division of Pulmonary, Allergy and Critical Care Medicine and lead author on the paper. “This opens the potential of a new therapeutic paradigm to treat individuals with COPD, and deserves testing in well-controlled clinical trials using agents known to augment CFTR function.”

The study was funded in part by UAB’s Center for Clinical & Translational Science, as well as the National Institutes of Health and the Cystic Fibrosis Foundation.

Rowe and a team of UAB researchers, including those from the Departments of Medicine; Pediatrics; Physiology and Biophysics; Pathology; the UAB Lung Health Center; and the Cystic Fibrosis Research Center contributed to this article.