An innovative program to screen patients in UAB’s emergency department helps identify people who don’t know they are positive for the virus that causes AIDS.

In the year since the University of Alabama at Birmingham emergency department began offering HIV screening for all patients ages 19-64, doctors say 20,000 tests were performed and 72 cases of HIV infection were diagnosed. 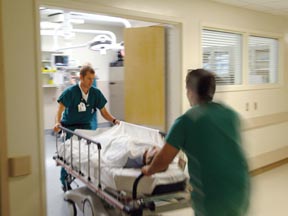 In August 2011, UAB Hospital joined 25 other metropolitan medical centers in a Centers for Disease Control and Prevention project to test patients to identify and treat some of the 21 percent of Americans who are HIV-positive but unaware they have the virus.

“There are more than 220,000 people in the United States unaware they are infected with the HIV virus,” said James Galbraith, M.D., a physician in the UAB Department of Emergency Medicine and testing program coordinator. “These are people who are not getting the benefits of treatment and potentially are spreading the virus.”

The screen is a simple blood test conducted during the emergency department visit. Patients may opt out of the test; however, said Galbraith, only 13 percent chose to do so during the first year of testing.

The UAB program identified 31 new cases of HIV, and there were an additional 41 positive tests in patients who knew their status but did not reveal it to staff until the re-test.

“Some patients are in denial, and others simply are not aware that good treatment options exist,” Galbraith said. “It’s important to identify and link all these patients into treatment. New therapies for HIV developed during the past 15 years have transformed HIV into a chronic, manageable disease. These therapies work best early in the course of infection, before a patient becomes sick and when testing is the only way to know if the infection is present.”

All 72 patients with positive results received post-test counseling in the emergency department and were referred to the 1917 Clinic, UAB’s home for HIV/AIDS care and treatment for 22 years. The clinic links positive cases to long-term treatment and counseling services available at UAB or community-based organizations.

Galbraith said of the 72 cases, 40 percent were female, 81 percent were African-American and the average age was 42.

UAB has funding from the CDC and the Alabama Department of Public Health to continue the testing program through 2016, Galbraith said. The CDC recommends that all adults get an HIV test at least once, and that those who engage in high-risk behavior have the test annually.

UAB has upgraded its testing abilities with the purchase of a new diagnostic machine, recently approved by the FDA. Galbraith calls it the fourth generation of HIV testing instruments, and UAB is one of the few hospital emergency departments to own one. The new device measures the antibodies to the HIV virus in the bloodstream, as do the third-generation machines, but also measures an antigen that is present on the virus. This early antigen recognition reduces the window period for detection of the virus by approximately five days, potentially enabling earlier diagnosis of acute HIV disease.

“Every infection that we prevent and every newly infected patient who gets therapy means that we slow this cascade of infection and help reduce the incidence of HIV/AIDS in the country,” said Galbraith.