Neurosurgical injuries following the April 2011 Alabama tornadoes tended to be spinal, not head or neck injuries in adults, but the opposite in children, according to UAB researchers.

Most adult injuries requiring neurosurgical care following the devastating 2011 tornadoes in central Alabama were spinal injuries, not head or brain injuries, while children overwhelming saw traumatic brain injuries, according to research from the University of Alabama at Birmingham (UAB) published in the Journal of Neurosurgery in April. 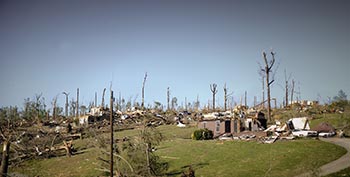 In the immediate aftermath of the April 27, 2011, storms, 27 patients were referred to the Department of Neurosurgery at UAB, the largest Level I trauma center in Alabama. Twenty-three of the patients had sustained injuries to the spine and spinal cord, and four patients had received intracranial injuries. Two of the 27 patients suffered from both types of injuries.

Many of the spinal injuries treated were limited to the thoracic and lumbar regions; those suffering cranial and cervical spinal cord injuries were less likely to survive the initial impact and were thus less likely to be brought to a hospital for treatment.

“The thoracic and lumbar spinal columns were perhaps better able to withstand the remarkable forces generated from the storms when thrown against a structure,” said Mark N. Hadley, M.D., UAB neurosurgeon and senior author of the study. “Additionally, locating injured citizens was easy enough if they were visible. Many were buried beneath debris and fallen, collapsed structures.  Localization and extrication took hours in most cases, a time frame not favorable for victims with severe primary cranial or cervical spinal cord injuries.”

Hadley and first author Joseph H. Miller, M.D., also report that children treated in the Children’s Hospital in Birmingham saw injuries that differed from those found in adult patients at UAB Hospital, despite the fact that adults and children were found in the same locations. Eleven children who required neurosurgery presented with traumatic brain injuries while only one presented with a spinal injury.

April 2011 was the most turbulent tornado month on record in the US: 758 tornados were identified, and 360 people were killed. On April 27 of that year, 206 tornados swept through the southeastern states. Sixty-two tornados struck in Alabama alone, killing 248 people. Two of the Alabama tornados were ranked EF5, the highest tornado rank on the Enhanced Fujita Scale. The Tuscaloosa-Birmingham EF-4 tornado, which affected the primary catchment area of the UAB Medical Center, resulted in approximately 1,500 injuries and more than 60 fatalities.