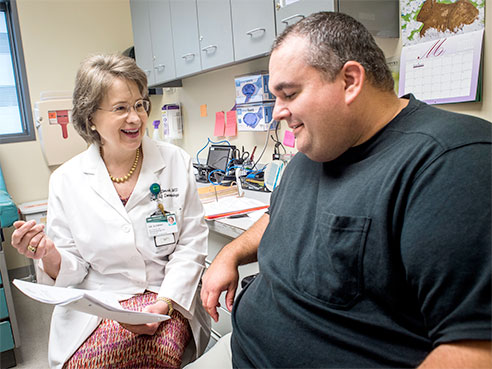 Boni Elewski, M.D., with patient Shawn IngramPsoriasis care has seen great advances in the past several decades, and many are thanks in part to the numerous treatment studies led by dermatology experts at the University of Alabama at Birmingham. UAB dermatologists believe a combination of ongoing studies and their focus on treating the disease may soon make psoriasis a thing of the past.

Psoriasis is a chronic skin disease affecting approximately 5 million adults in the United States, according to the National Institute of Arthritis and Musculoskeletal and Skin Diseases. The condition causes patches of inflamed, scaly skin that can vary in coverage from a small amount to full body.

One of the nation’s leading psoriasis researchers, Boni E. Elewski, M.D., professor of dermatology and a past president of the American Academy of Dermatology, says her father had psoriasis; seeing how it affected him was her motivation to become a dermatologist. As a dermatology resident 30 years ago, she saw patients had very few treatment options.

Patients with psoriasis have to deal with more than the condition’s showing on their skin, Elewski says.

“Patients say they have trouble coping and can’t exist with this disease,” Elewski said. “Their degree of suffering is measured not only by body surface area affected, but also by their ability to function day to day and their quality of life. It’s not unusual to have patients with total body psoriasis, and it can greatly impact their lives, possibly leading to employment issues, weight gain, drinking problems, etc. It’s traumatic for them.”

“We’ve come a long way from the old days of psoriasis care, which started out with monthlong hospital stays and the use of coal tar and UV radiation, the effects of which would soon wear off,” Elewski said. “A lot of the progress came through drug efficacy trials performed here at UAB over the years.”

A drug currently being tested at UAB quickly cleared up the psoriasis of 38-year-old Shawn Ingram of Jasper, Alabama.

“It was terrible. It was ruining my life,” Ingram said. “My whole arm was white. It was on the backs of my thighs, and it covered more than half of my body. It started with a little patch that itched and blew up from there. It was the worst itch you could imagine times 10.”

Elewski says the itching from which psoriasis patients suffer is something many overlook as a side effect.

“People forget that psoriasis patients itch, and the skin disease that itches the most is psoriasis,” Elewski said. “Although Mr. Ingram had severe psoriasis, itching was a driving factor in his wanting to clear it up. After his first shot of this drug we are testing, we saw him again within two weeks, and it was clearing.”

“It was great,” Ingram said. “The itch went away in just a couple days, so I was pleasantly surprised. Because of the treatment, you can’t even tell I had psoriasis.”

That is what Elewski wants for all patients who have psoriasis.

“What we’re trying to do now is target exactly what the immune deficiency is with biological treatments,” she said. “This means, rather than weakening the whole immune system, we find the problem and solve it, so it’s safer, faster and better. Instead of three to four months to improve, thanks to the new drugs, some patients are clearing in a month and stay clear with continued use. It’s a life-altering experience for patients.”

Elewski says she is proud to have been involved in so many drug trials that have led to FDA-approved treatments for psoriasis.

“It is exciting being on the forefront of psoriasis care doing studies and focusing on treating this skin disease,” Elewski said. “I believe in 10 years when psoriasis is mentioned, medical residents will ask, ‘what is psoriasis?’ At least that’s my goal.”

Colleague Wendy Cantrell, DNP, assistant professor of dermatology, shares Elewski’s passion for making psoriasis a thing of the past.

“My mom has psoriasis and psoriatic arthritis — she was diagnosed after I came to dermatology,” Cantrell said. “She suffers from significant joint pain. Seeing the progression has made me more passionate about making sure we treat patients’ joint disease as aggressively as we treat moderate to severe skin disease.”

This means spending a lot of time with patients, rather than stopping at prescribing a skin cream to treat the external issues psoriasis can cause.

Cantrell also points to the commitment to research as a reason UAB Dermatology has excelled so much in psoriasis.

“One of our goals is to be front-line in the research,” Cantrell said. “We have had the benefit and privilege of testing most of the drugs that are on the market for the systemic treatment of psoriasis. Our goal is to treat patients with the most efficacious and safe method for each individual, and that’s different for each patient because these drugs have little nuances that make them fit each patient differently.”

Being on that front line has been rewarding to both Cantrell and Elewski.

“We have saved the lives of countless people,” Elewski said. “So many patients, and every person has a story on how these drugs have changed his or her life. I wish I could’ve done more for patients years ago; but now with a few shots, their lives are changed.”