Teaching metabolomics: a UAB outreach to researchers in sub-Saharan Africa

by Jeff Hansen
The UAB course was part of a master’s degree program in bioinformatics for researchers in Mali, where malaria is a scourge. 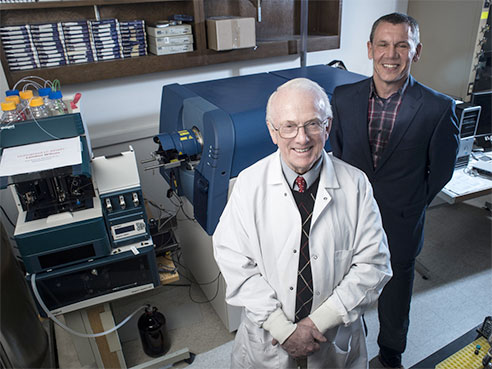 Stephen Barnes, front, and Janusz KabarowskiFor the last 10 weeks, Stephen Barnes, Ph.D., University of Alabama at Birmingham, has taught a group of master’s degree students at a university in the land-locked African nation of Mali. His outreach — via two hours of video conferencing each day and a lot of class material preparation — came at the request of the National Institute of Allergy and Infectious Diseases, to help NIAID create a cadre of bioinformatics researchers at one of the ground zeros for the deadly infectious disease malaria.

Mali is marked by the torrid Sahara Desert to the north and a steamy, humid climate in the south. Malaria is one of the main causes of death and suffering in Mali, and it is responsible for nearly one-third of all hospital outpatient visits.

Darrell Hurt, chief of the bioinformatics branch at NIAID, says he asked Barnes to lead the class “because we had an immediate need.”

“Our African Center of Excellence in Bioinformatics (ACE) program is really kind of an ongoing experiment on how to build sustainable bioinformatics and computational biology capacity in countries where infectious disease is endemic,” Hurt said. “In the case of ACE-Mali, the academic partnership included the development of a new master’s program in bioinformatics at University of Sciences, Techniques and Technology of Bamako.”

The curriculum at USTTB surveys nearly every aspect of computational approaches to modern biology. Instructors in Bamako, the capital and largest city of Mali, handled most of the courses, while NIAID held weekly seminars in the first semester and helped teach genomics, and also molecular modeling and simulation, in the second semester. But for the third semester, the university and NIAID lacked the expertise to teach metabolomics.

Barnes, a UAB professor of pharmacology and toxicology in the UAB School of Medicine, has taught a UAB graduate course in metabolomics for the last two years, and the materials for his class were already available on the web. UAB has also been the host for the first three, weeklong, NIH-sponsored Metabolomics Training Workshops in 2013-15, and UAB will host the fourth workshop in July. Thus, Barnes and a handful of other instructors at UAB and other institutions were able to step up and take over the metabolomics teaching for the Malian students. 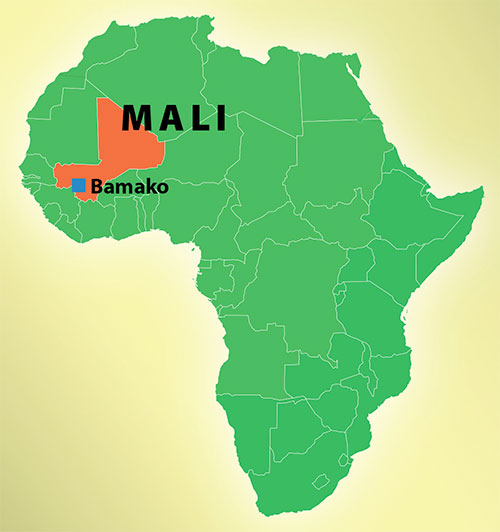 Metabolites are the intermediates or products of metabolism, the chemical reactions that sustain the living cell or organism. Measurement of metabolites gives an instant photo of the physiology in a cell, and metabolites can change in response to infection or disease. Metabolomics is still a somewhat emerging field that will grow as technical ability to measure metabolites improves.

“As many are finding, the basis of action of biological systems is driven by individual metabolites and other chemicals that occupy individual environments in our bodies,” Barnes said. “Bacteria, with an incomplete complement of metabolites, migrate to environments where they can find the missing metabolites. Viruses commandeer control of the metabolic pathways.”

“Metabolomics is much more than the metabolic pathways in human cells,” Barnes said. “It’s all the compounds that come from what we eat, or are produced by the microorganisms in the human microbiome. We call those ‘environmental chemicals.’ Edible plants like fruits and vegetables have far more genes, and hence more metabolites, than do humans because they engage in chemical warfare with other plants and organisms. Consequently, as we eat more fruits and vegetables, the observed set of ‘metabolites’ is substantially increased.”

Barnes says centers studying and using metabolomics have been confronted by a startling result.

“Less than 20 percent of the observable metabolites have been encountered before,” Barnes said. “Most of these have not been characterized.”

Barnes says metabolomics will become part of precision medicine in the future, such as studying the metabolome to identify reasons for differential aging and disease onset, or predicting responses to drug and surgical interventions. In a way, metabolomics is not new. Everyone is familiar with measuring a metabolite like cholesterol to determine the risk of cardiovascular disease, or phenylalanine for phenylketonuria in young infants. Modern metabolomics allows the discovery of novel metabolites or patterns of known metabolites, not previously associated with a particular disease. In some cases, it rationalizes why the microbiome plays an important role in disease risk.

At UAB, he says, various researchers have used metabolomics to help learn how sperm are able to locate an egg at a distant, often concealed location, and are using it to study cancer cell metabolism, metabolic disease, obesity and pregnancy, yeast aging, lung health, and gastrointestinal diseases.