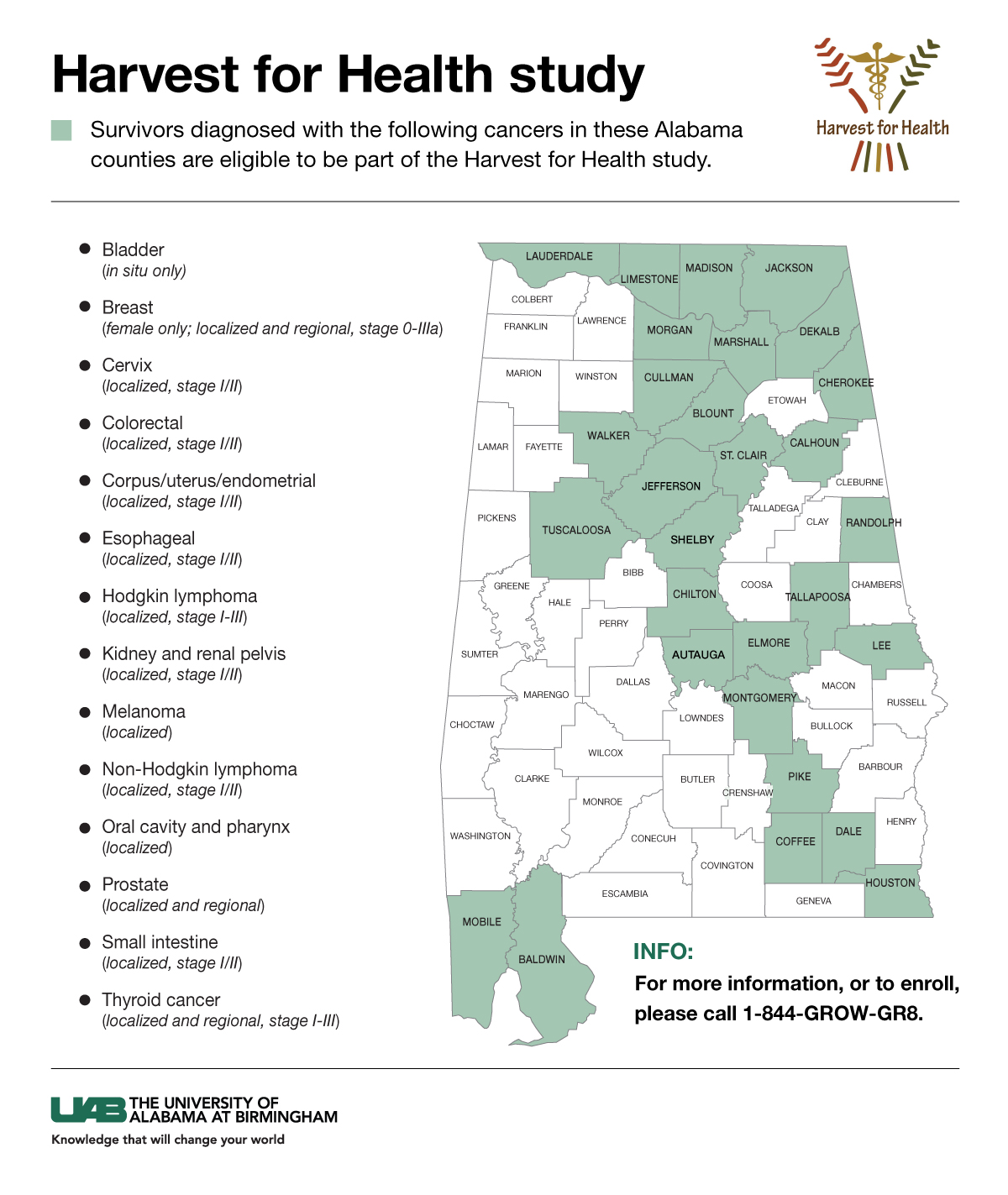 Click to enlarge In 2013, University of Alabama at Birmingham  researchers introduced breast cancer survivors to a new kind of therapy — gardening. Harvest for Health, an ongoing study at UAB, pairs cancer survivors with a master gardener from the Alabama Cooperative Extension System.

Wendy Demark-Wahnefried, Ph.D., R.D., professor and Webb Endowed Chair of Nutrition Sciences in the Department of Nutrition Sciences  and associate director for Cancer Prevention and Control at the UAB Comprehensive Cancer Center, has received a R01 grant to expand this study to 426 cancer survivors for further data.

There are close to 15 million cancer survivors in the United States, and the majority are 65 years of age or older. Despite improvements in treatment and five-year cure rates, cancer survivors are at greater risk for second malignancies, cardiovascular disease, osteoporosis and functional impairment — downstream effects that result in an annual cost of approximately $130 billion each year.

“Cancer survivorship has been proclaimed a national priority, with a call to develop effective interventions that can prevent, delay or mitigate the adverse effects and co-morbidities attendant with cancer and its treatment,” Demark-Wahnefried said.

She says this new study builds on strong R21-supported preliminary data, and relies on the infrastructure of the ACES Master Gardener program.

“Studies have shown a link between diet and cancer, and between physical activity and cancer,” she said. “We want to see how cancer survivors respond to this gardening intervention, as well as how it affects their diet and exercise behaviors, and their health-related quality of life and physical health status.”

UAB provides tools and seedlings, and will either prepare a raised bed in the yard of a survivor’s home or provide EarthBoxes® — large gardening containers on wheels — that can be kept on a porch or patio. Master gardeners visit with the survivors twice a month for one year, offering advice, expertise and suggestions, while answering the questions new gardeners have.

Demark-Wahnefried wants to have the new gardeners planting early crops such as lettuce and pea pods by mid-February and expanding to tomatoes, peppers, eggplant, kale or just about any other suitable vegetable in the spring. As the study progresses throughout the year, participants in different regions of Alabama will be planting different types of produce.

The master gardeners, who have completed a rigorous certification process from ACES, are all volunteers.

“They are very excited to be making a difference in the lives of cancer survivors and their families,” Demark-Wahnefried said. “We have plenty of master gardeners standing by. We just need more cancer survivors to participate in the therapy.”

The research team believes Harvest for Health will be both fun and educational, while also motivating survivors to eat better. Preliminary results show improvement in physical function in many participants.

“They show improved strength, especially in their hands, improved mobility, and an increased ability to get up and down,” Demark-Wahnefried said. “That’s an added benefit on top of better nutrition.”

Participants in the study do not have to go to UAB, but will have three visits from the research team at their home during the course of the project, along with the twice-monthly interactions with the master gardeners.

For more information, or to enroll, please call 844-GROW-GR8.