As Alabamian Calvin Kennedy sat exhausted and in excruciating pain some 17,000 feet above sea level, he was not ready to give in. Kennedy, a nurse team leader in the University of Alabama at Birmingham’s Post-Anesthesia Care Unit, had 3 miles to go — a seven-hour hike — on his journey to make it to the summit of Mount Kilimanjaro. 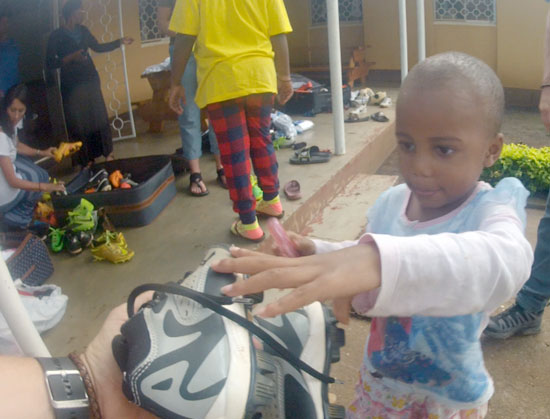 Team Mountain took more than five suitcases full of soccer cleats, balls and gear t o deliver to one of the local villages prior to their Mount Kilimanjaro climb.There were the torn ligaments in his left knee. The avascular necrosis in both knees. The intestinal parasite he had acquired while climbing. And, of course, his transplanted kidney — his second transplanted kidney. None of these things was going to stop him from raising awareness of kidney disease and the power of living- and deceased-donation giving recipients a second chance at life.

“That’s what I kept telling myself,” Kennedy said recently. “I really wanted to make it.”

But an hour and a half into the last climb, Kennedy’s body — his back and his knees — would let him climb no more. Kennedy made this trip during the summer to Tanzania, Africa, along with 11 others members of Team Mountain who were climbing Mount Kilimanjaro in an effort to bring awareness to organ donation and other causes. As it was apparent Kennedy’s body could take him no farther, one by one the members of Team Mountain hugged Kennedy, and both consoled and congratulated him on a job well-done.

“The fact that Calvin climbed more than 17,000 feet was just a remarkable achievement,” said Bob Kuykendall, leader of Team Mountain and a living transplant donor. “He had been hurting and sick for quite a while on the way up. I know he was disappointed, but he had absolutely nothing to be disappointed about. What he did, what he achieved, was stunning. It was incredible.”

“I’m disappointed in myself that I didn’t make it, but I didn’t want to put anyone else in danger by continuing on,” Kennedy said. “I’m really incredibly proud of my Team Mountain teammates who did go on to make it to the summit of Kilimanjaro. What an amazing feat by them. I definitely wanted to make it to the top with them, but reaching the summit was not the ultimate message I was trying to send on my journey. I wanted to show people that, when you do get a transplant, you can live and live well and do things — do great things. And if you donate an organ as a living donor or a deceased donor, you can help someone live a productive and exciting life. I think this accomplished that. I hope I did.”

Kuykendall was amazed by the resolve shown by Kennedy and all of Team Mountain in their resolve to climb Mount Kilimanjaro, the tallest freestanding mountain in the world. About 35,000 tourists attempt to climb the mountain each year, and about half of them make it to its peak.

Many on Team Mountain were battling altitude sickness as they climbed higher and higher. The headaches and exhaustion were difficult for almost everyone in the group to overcome.

Kuykendall’s son, Cade, almost succumbed to the elements. But the 14-year-old — the youngest climber the Team Mountain porters said they had ever taken to the summit — endured his altitude sickness to make it to the top. 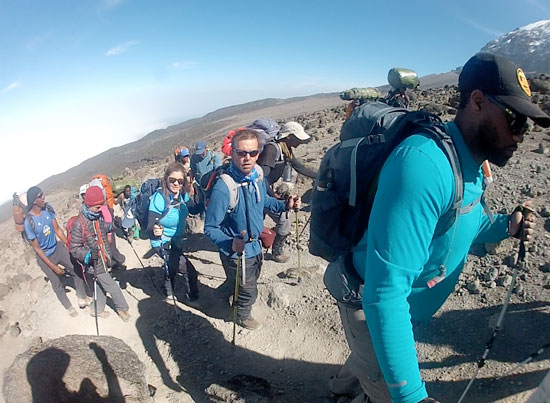 UAB PACU nurse Calvin Kennedy, center, may have finished just short of Mount Kilimanjaro’s summit, but the two-time organ transplant recipient’s accomplishment, “should make any organ donor and recipient proud.”“Everyone was battling something — sickness, exhaustion, bronchitis, pain — it was incredible what everyone was able to accomplish,” Kuykendall said. “I certainly felt bad for Calvin, but here’s the thing everyone should know about him: Everybody on Team Mountain, even though we did it as an awareness for organ donation and other causes, it was something we wanted to do. It was a bucket list item for everyone on the team. That wasn’t really the case for Calvin. He wasn’t like, ‘I’ve always wanted to climb Kilimanjaro.’ He saw the opportunity to show how great a life you can live after receiving a transplant. He wanted to show your life doesn’t have to be sedentary or cautious. You can live. You can take chances. You can do amazing things. He knew by doing this it would bring attention to the human value of organ donation and those battling the kidney disease, and he has. What Calvin accomplished should make any organ donor and recipient proud.”

Both of Kennedy’s transplants — in 1990 and 2014 — have taken place at UAB Hospital. Kuykendall donated a kidney to his friend Greg Hasberry in 2015.

In 1990, Kennedy was one of the first people in the world whose transplanted kidney was saved by a new anti-rejection drug, known today as CellCept. The drug, which UAB researchers and surgeons played a significant role in developing, is now used by almost every transplant center around the world to prevent rejection.

Kennedy has a unique family history with kidney disease. He had a cousin who was transplanted before him, due to complications from IgA nephropathy, the same disease Kennedy had. After Kennedy’s diagnosis, two more cousins on his mom’s side of the family were diagnosed with the same disease.

Bruce Julian, M.D., a professor emeritus of medicine in the UAB School of Medicine’s Department of Nephrology, was so intrigued by the Kennedy family history that he has studied them for years. Julian goes to the Kennedy family reunion every four or five years to draw blood to run tests.

If you would like to explore the possibility of becoming a living donor, fill out the Living Kidney Donor Screening Form online. Also, visit www.alabamaorgancenter.org or OrganDonor.gov today to register your decision to be an organ, eye and tissue donor upon death.

Kuykendall is already prepping a second Team Mountain climb of Kilimanjaro next year. For more information, or to contact Kuykendall about being a part of next year’s team, visit the Team Mountain website.