The Sisters: Formed by cancer, held together by unwavering love

by Holly Gainer
A group of women who range from ages 30-80 formed a support group with one another in their breast cancer fight in an effort to live life to the fullest.

It all started with a phone number listed in a newspaper article in 2004. Sally Graul, who had recently been diagnosed with breast cancer, called the number, unaware the call would ultimately change her life.

“I saw a newspaper article about a group of women battling breast cancer who had just been to Montana on a fishing trip, and I thought that sounded like it was right up my alley,” Graul said. “I dialed the number, and from there, I joined a family.”

The family Graul is referring to is called The Sisters, a diverse group of women ranging from 30-80 years old, who have one thing in common — breast cancer. Some of the women are currently fighting the disease, while others are survivors or co-survivors. 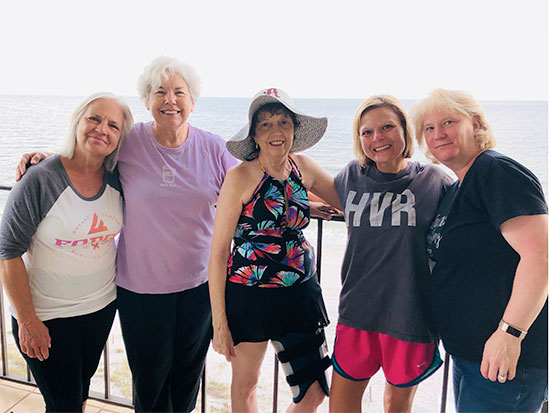 Some of The Sisters traveled to Orange Beach, Alabama shortly after Graul's last treatment to celebrate a member's 80th birthday. Pictured from left: Madeline Harris, Kay Argo, Sally Graul, Kristen Noles and Libby Collier.“Breast cancer is the common thread, but we do not let it define us,” said Kay Argo, one of The Sisters and the partner of Kathy Kemp, a Birmingham journalist who died from breast cancer in 2010.

It was Kemp’s article in the Birmingham News that led Graul to call the number in the paper, leading her to Madeline Harris. Harris, who was a coordinator in the Interdisciplinary Breast Cancer Center at the University of Alabama at Birmingham at the time, had arranged a trip for women battling breast cancer and their loved ones to travel to Montana to fly fish for a week. She reached out to Kemp, whom Harris met while Kemp was undergoing cancer treatments at UAB, and invited her and Argo to join them.

“We embarked on this trip with these women we barely knew, and when we came home, it left us with this feeling that we had a sisterhood,” Argo said. “That’s how we came to refer to each other as The Sisters. It was the most beautiful bonding experience.”

“If someone in our group has been seriously ill or in her last journey, we are with her,” Harris said. “We have lost survivors who were part of our group, and we have gained survivors, like my daughter, who was diagnosed at a very young age. We are an evolving group, and we do anything we can to have fun, have joy. Sally is very easy to do that with. She is so full of joy.”

In late September, the group attended Graul’s last radiation and 80th cancer treatment since she was diagnosed. Graul, who is battling metastatic breast cancer and recently had a hip replacement after the cancer spread to her bones, arrived at her appointment dressed in a hot pink, bedazzled bra over a pink turtleneck, ballerina pink parachute pants, and a tiara on her head. Or as she calls it, her “princess outfit.”

“I have a philosophy called the princess theory,” Graul explained. “When you get a cancer diagnosis, especially when the cancer has metastasized, you don’t automatically understand that you are going to have to ask for help, especially women because we are usually the caregivers, the ones who take charge. But, princesses don’t have to ask for things; they can just tell someone what they need, and I think every woman facing a serious illness should act like a princess. So, this is my princess outfit.”

While her outfit turned heads, it was the women surrounding her that are her most cherished accessories.

“These are my sisters; they are my sisters at heart,” Graul said. “This has been a rough road and lately it’s been a little rougher than usual; but to have them here today with me, and the fact that I can dress up and everyone can laugh, it is so special.”

It is not just the patients who are cared for in this group. The co-survivors are equally important and are fully embraced by the women. Argo says, as a co-survivor, the love, support and joy she and Kemp experienced from the group are some of her happiest memories. 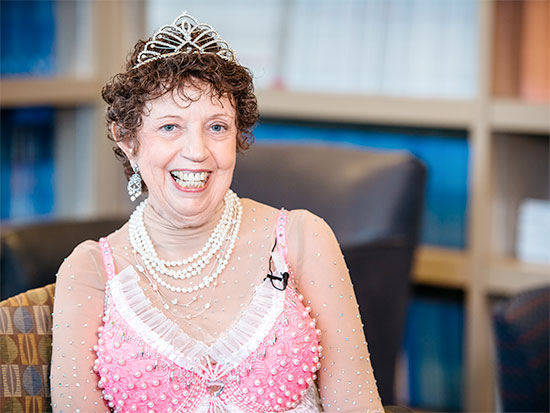 Sally Graul dressed up in her "princess outfit" to celebrate her last radiation treatment and 80th cancer treatment since she was diagnosed.“A cancer diagnosis is sorrowful and sad, but the years Kathy and I had together when she had cancer were our sweetest years,” Argo said. “We had a ball. We traveled, we laughed, we were surrounded by wonderful medical caregivers and the sweetest of friends who were all walking the same walk that we were. That all came from The Sisters.”

Argo has remained a part of The Sisters since Kemp’s death. And while seeing loved ones experience what Kemp went through brings back sad memories, it is The Sisters who keep her going.

“After Kathy died, The Sisters were there for me all of the time. Whatever I needed help with, they were there. I don’t know how I would have gotten through that without them,” Argo said. “I feel like part of being in The Sisters is that I love them; but also, this is a way for me to honor Kathy. I feel like Kathy is there doing this with me, and that makes my heart feel good and full.”

When Harris’ daughter Kristen Noles was diagnosed with breast cancer at age 35, the women were there to care for Noles and her husband and three young children.

“Because they had experienced what being diagnosed with cancer was like, going through treatment and having surgery, they anticipated what I would need without my ever having to ask,” said Noles, a nurse manager and adjunct instructor in the UAB School of Nursing. “They did that for my children, for my husband — for all of us.”

Noles says Argo played a critical role when it came to providing support to her husband.

“Initially, I didn’t pick up on his needs,” Noles said. “I was really focused on the kids and getting well, and so he was left just taking care of the kids, of me. It was The Sisters who reached out to him, supported him. Kay really met my husband where he was during that time and helped him in so many ways because she understood what it was like to be the partner to someone battling this disease.”

The greatest gift The Sisters give to one another is their ability to celebrate life and find joy, even during the darkest times.

From vacations to Antigua to day trips to nearby lakes, these women have not let cancer slow them down.

“I didn’t see myself as sick, and a huge part of that is because of them,” Noles said. “For The Sisters, it was like nothing because some were living with metastatic disease, others had lost loved ones to the disease, yet they were still thriving. I saw that, and because of them, I didn’t worry.” 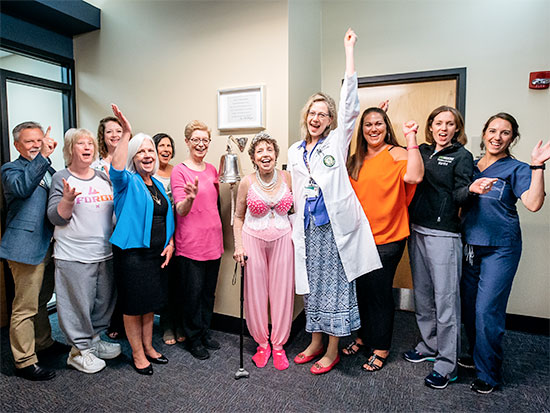 Members of The Sisters and some of Graul's health care team, including Kimberly Keene, M.D., Graul's radiation oncologist, and Rodney Tucker, M.D., director of the Center for Palliative and Supportive Care at UAB, celebrate her last radiation treatment at the UAB Acton Road Clinic.The sheer will to celebrate life was demonstrated a week after Graul’s last radiation treatment when the ladies traveled to Orange Beach, Alabama, to celebrate one of the members’ 80th birthday.

As they were getting ready to go out to dinner, Graul’s newly replaced hip popped out of the socket. Instead of ending the trip early and missing their dinner plans, Noles and a few others took Graul to the emergency room, while the rest of the group went to dinner.

“We were in and out of the ER, we beat the rest of our friends home, and we partied until 1 a.m. because we just celebrate life,” Noles said. “You would never have known there was a medical emergency. We celebrate life — we are here together, and we celebrate that.”

“That is what we do,” Argo said. “You may be down, but nobody is out. We just keep on going, always together.”

Center for Palliative and Supportive Care

Another piece of the puzzle that helped and united The Sisters was the Center for Palliative and Supportive Care at UAB. Each woman has encountered the unit, whether while caring for a loved one or being a patient. All say the center’s work and methods changed their lives.

“I really encourage all survivors and co-survivors to participate in UAB’s palliative and supportive care center,” Harris said. “I tell people don’t wait for palliative care, start at day one. It is not just for end of life. Cancer is a chronic family disease. In palliative care, the family members are treated as the patients, too. It’s not just the person that they are treating; it is everyone that they love.”

“When Madeline first mentioned palliative care to Kathy and me, I had a very visceral reaction,” Argo said. “I thought, ‘we aren’t doing that, she’s not dying.’ I didn’t understand what it was.”

Palliative and supportive care is a medical specialty that uses a comprehensive approach to caring for people with serious illness by focusing on the whole patient, addressing the physical, emotional, social and spiritual suffering of disease. Beginning at the moment of diagnosis, palliative care can help address symptoms and set goals for care, focusing on quality of life, dignity and respect.

“Our program has learned from these ladies, and we are a better program because of them,” said Jennifer Hicks, the administrative director of the Center for Palliative and Supportive Care at UAB. “They have shown us how groups can provide practical, emotional and social support to one another while also feeling supported. We share their experience with others who are looking to provide support to people dealing with serious illness.”

When Kemp started seeing a palliative care physician to manage her pain, Argo says, it made a significant difference. She continued to receive care and support from the palliative care team up until her death.

“Kathy’s last 10 days were on the palliative care unit, and I hope when my time comes, I am also lucky enough to be there,” Argo said. “We felt safe and protected. Her death was very intimate. I never imagined your loved one’s death could have any redeeming qualities, but it did. It was very bittersweet. She died the way she lived the last years of her life, surrounded by her sisters.”