by Yvonne Taunton
A UAB Department of Philosophy professor was recognized for academic achievement and involvement in the community. 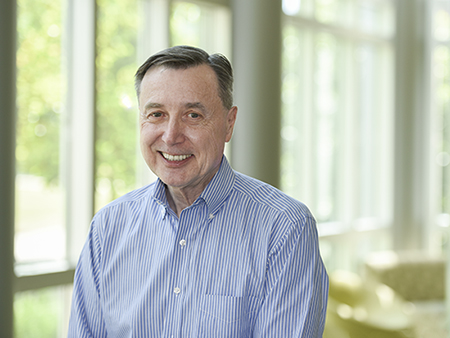 Gregory Pence, Ph.D.Gregory Pence, Ph.D., professor and director in the University of Alabama at Birmingham’s College of Arts and Sciences’ Department of Philosophy, has been named the winner of the 2019 Caroline P. and Charles W. Ireland Prize for Scholarly Distinction.

The award is presented by the UAB College of Arts and Sciences to a full-time faculty member for professional and academic achievements and contributions to the university and local community. The prize, made possible by the Caroline P. and Charles W. Ireland Endowment for Scholarly Distinction, comes with $5,000 and a Steuben crystal engraved award.

“I admire previous winners of this award and am pleased that they’ve chosen me,” Pence said. “Coming after 43 years at UAB, it’s gratifying.”

Pence is an acclaimed bioethics scholar, and best known for his bestselling Medical Ethics textbook, now in its eighth edition. He is also widely known for his defense of humane biotechnology, such as cloning and genetically modified crops.

As a UAB professor, Pence has won both the Ingalls and President’s Teaching awards and also directs the Early Medical School Acceptance Program. In addition, he has coached the UAB Ethics Bowl Team, which won the national championship in 2010, 2011, 2016 and again in April of this year.

Charles W. Ireland and his wife Caroline P. Ireland established the Caroline P. and Charles W. Ireland Endowment for Scholarly Distinction, which today funds two annual Ireland prizes. The Ireland Distinguished Visiting Scholar Award is given to a distinguished intellectual outside of the UAB academic community whose work is groundbreaking and transformational in his or her field. While on campus, honorees give a public lecture and share their knowledge through informal meetings with students and members of the faculty.