by Shannon Thomason
Fields will oversee all daily operations and programming for AEIVA, as well as serve as a liaison for a variety of stakeholders on campus and in the community. 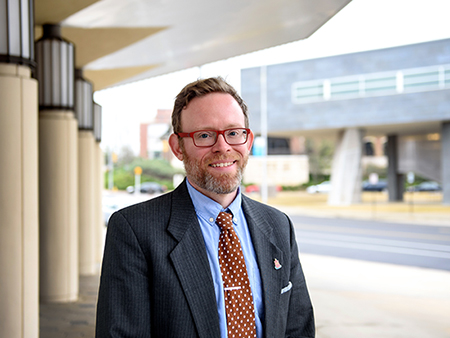 John FieldsJohn Fields is the new senior director of the Abroms-Engel Institute for the Visual Arts at the University of Alabama at Birmingham.

Fields will oversee all daily operations and programming for AEIVA, as well as serve as a liaison for a variety of stakeholders on campus and in the community.

Fields joined UAB in 2011 as the interim director for the UAB Visual Arts Gallery and as AEIVA’s first curator in 2014. Fields brings more than 15 years of experience as an artist, educator, curator and administrator to his new role. He has curated 38 of AEIVA’s first 50 exhibitions, including “Warhol: Fabricated,” “Titus Kaphar: Misremembered” and “Mary Frances Whitfield: Why?” His exhibitions have been featured in the New York Times, Huffington Post, Raw Vision Magazine, Alabama Public Television, WBHM, and numerous national and regional media outlets.

His leadership of the AEIVA Collections Committee has seen the addition of works by major contemporary artists to AEIVA’s permanent collection. These works most recently include expansive collections by iconic American photographers David Levinthal and Bruce Davidson. Fields’ commitment to innovative educational programming has produced significant cross-disciplinary collaborations with both UAB and local community organizations, including Birmingham Civil Rights Institute, UAB Office of Diversity Equity and Inclusion, the Birmingham Museum of Art, The Jefferson County Memorial Project, the City of Birmingham Mayor’s Office, and the UAB School of Medicine, to name a few.

An alumnus of the UAB Honors Program, Fields received a Bachelor of Arts degree in art from UAB in 2003 and a Master of Fine Arts degree in painting from the University of New Orleans in 2007.