Two UAB students will have an opportunity to interview for the 2020 Class of Truman Scholars.
Written by: Karen Templeton
Media contact: Yvonne Taunton 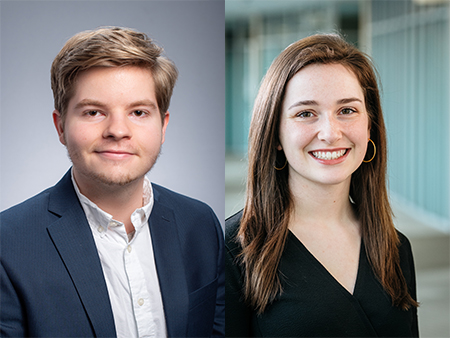 Whitman “Whit” Miller and Allie HaynesTwo University of Alabama at Birmingham juniors will compete as finalists for Harry S. Truman Scholarships, which provide up to $30,000 for graduate study.

Allie Haynes and Whitman “Whit” Miller have been selected by the Harry S. Truman Foundation to compete with other students across the country for the 60 highly competitive awards. The awards are given to college juniors for leadership in public service.

The foundation will interview finalists in March and announce the 2020 Class of Truman Scholars in late April.

“Allie and Whit impressed our faculty nominating committee with their consistent records of service and leadership. While focused on different issues, they share a belief in what can be accomplished when people of good will work together to address seemingly intractable social problems,” said Ashley Kuntz, Ph.D., director of UAB National and International Fellowships and Scholarships. “They are already actively working toward the type of social change they want to see in our state, our country and our world. We are proud they will be representing UAB on the national stage.”

Haynes, from Memphis, Tennessee, is an economics major in UAB’s Collat School of Business, spent six years serving with the Refugee Empowerment Program in Memphis and completed an Advocacy Internship for Refugees with World Relief in 2019. She aspires to work for the International Rescue Committee or the United Nations High Commissioner for Refugees. Haynes is currently interning at the UAB Institute for Human Rights and Momentum Leadership Birmingham. She is a student in the UAB Honors College’s Global and Community Leadership Honors Program.

Miller, from Enterprise, Alabama, is a political science major in UAB’s College of Arts and Sciences Department of Political Science and Public Administration who serves as president of UAB College Democrats. Miller is immersed in local, state and national politics. He interns for the City of Birmingham’s Office of Economic Development. He was a paid poll worker in the last Alabama gubernatorial election, and he spent the summer of 2018 canvassing more than 2,000 potential voters in the state with Let America Vote. Recently, Miller signed on as a student organizer for the re-election campaign for Senator Doug Jones. Miller aims to build a career in the Alabama Democratic Party. He is a member of the UAB Honors College’s University Honors Program.

“The Truman Scholarship awards are highly competitive, and it is such an accomplishment for our students to have made it this far in the process,” said Suzanne Austin, UAB senior vice provost and senior international officer. “I am grateful to a supportive team in our university’s National and International Fellowships and Scholarships office who help students navigate the awards process. Their dedication coupled with our students’ high achievement and records of advocacy and community service have made this type of recognition possible.”

Congress established the Truman Scholarship Foundation in 1975 as the federal memorial to President Harry S. Truman. As opposed to a brick and mortar monument, this living memorial enables students to live out the values of service that characterized the 33rd president’s career. The Truman Foundation supports college students as they explore public service leadership.