Tyler Peterson has been elected to a three-year term to lead the Southern Association for College Admission Counseling.
Written by: Karen Templeton
Media contact: Alicia Rohan 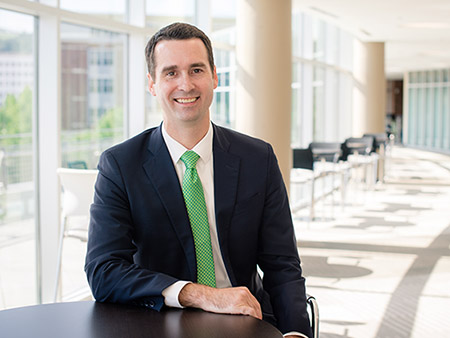 Tyler PetersonTyler Peterson, executive director of Admissions, Financial Aid and Scholarships at the University of Alabama at Birmingham, has been elected to a three-year term as president of the Southern Association for College Admission Counseling. His term began in April.

“He’s managed a strategy and team to help boost freshman enrollment and strengthen partnerships with community colleges,” Barnes said. “All these efforts help UAB grow and positively impact the economic health of our city and state. Given his talent and dedication, it is no surprise he’s been selected to lead such a prestigious organization.”

Peterson has led new student recruitment, and under his direction, freshman class enrollment increased to more than 2,300 in 2019, from about 1,600 in 2016, and admissions of out-of-state freshmen increased 50 percent between 2015 and 2019.

“We are proud to have Tyler leading the SACAC,” said UAB Provost Pam Benoit. “His election to this position speaks volumes about his dedication, UAB’s role as a leader in enrollment management, student recruitment and retention, and the exceptional financial aid services provided to our large student population.”

The Southern Association for College Admission Counseling is a nonprofit, professional association founded in 1966 as a chartered affiliate of the National Association for College Admission Counseling. The organization includes members from secondary schools, colleges and universities, and educational consulting firms in Alabama, Arkansas, Florida, Georgia, Louisiana, Mississippi, North Carolina, South Carolina, Tennessee and the Caribbean. Members work together to promote high professional standards in the college admission process by exchanging ideas, sharing common goals and preparing counselors to serve students in the transition from high school to college. Additionally, more than 250 non-voting associate members from 30 other states participate in the association.