Maddox named University Teacher of the Year by national association

John Maddox, Ph.D., associate professor of Spanish, was recognized for his innovative uses of technology in the classroom to unite students overseas and dismantle xenophobia, in addition to his advocation for the equity of all people during his lessons.
Written by: Dylan Baggiano
Media contact: Shannon Thomason 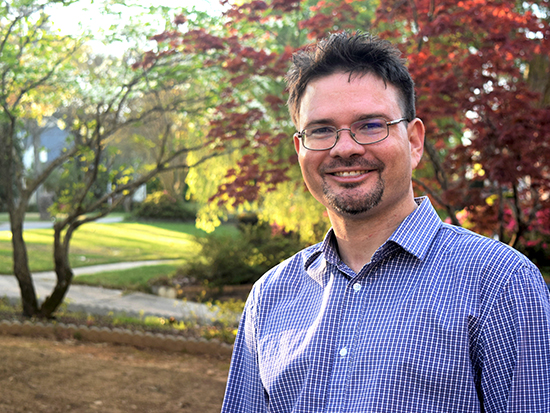 John Maddox, Ph.D., Ph.D., associate professor at the University of Alabama at Birmingham, is the American Association of Teachers of Spanish and Portuguese University Teacher of the Year.

Maddox teaches Spanish and Portuguese languages and Brazilian culture in the College of Arts and Sciences’ Department of Foreign Languages and Literatures. He received the honor July 10, during the association’s annual conference, when the group recognizes the achievements of its members.

During the ceremony, Maddox was praised for achieving “the epitome of teaching excellence at the university level.” He was lauded for his “Medicine and Literature” course, which is groundbreaking in the field of Spanish for specific purposes, encouraging critical thinking and addressing timely topics like xenophobia. Outside the classroom, Maddox advocates for immigrant rights and incorporates the topics of race, gender and ethnicity into class discussions. He has organized workshops and colloquia for teachers and scholars on these topics. His team-based courses go beyond daily conversation to include working on student-made iMovies to learn about medicine, literature, history and art.

“My outstanding colleagues in the Department of Foreign Languages and Literatures have encouraged me to become a creative and informed teacher,” Maddox said. “Working at UAB has pushed me to maximize the learning potential for students in my classes and to rethink what it means to be an effective language teacher for all majors and all levels. For this, I am privileged to be distinguished as Teacher of the Year.”

Maddox’s innovative uses of technology allow his students to create conversation exchanges with prestigious universities in Mexico and Chile. An example of his creative lessons is a Twitter war between characters in a short story by Carlos Fuentes.

His interdisciplinary research on the African diaspora informs his classes, as he publishes on social justice issues like memory of slavery, prison conditions and freedom of speech.

He has given back to the community of scholars and educators by serving the AATSP at the local and national levels. This year, he led the Graduate Student Day Paper Competition to mentor new members of the organization.

Maddox, a non-native speaker of both languages he teaches, expressed gratitude to his teachers, particularly Jane “Juana” Futral of Wheeler County High School in Alamo, Georgia, his first Spanish teacher. Like her, he has taken students abroad to Spain and Puerto Rico.

Throughout his career, Maddox says, his colleagues have helped him to become a better educator and mentor, and also helped guide him in his areas of study and through his combined Ph.D. in Spanish and Portuguese.

Today, Maddox focuses on his professional development, like the Signature Core Fellowship through programs at the UAB Center for Teaching and Learning. He works to create future language educators as well as bi- and tri-lingual professionals outside academia.

Maddox is one of several teachers in the UAB Department of Foreign Languages and Literatures who won awards in 2020 and 2021: