by Hannah Echols
Kesha L. Thurston, DNP, and LaDana Williams-Davis, DNP, are alumnae of the UAB School of Nursing and have worked in the UAB Health System as CRNAs for more than 10 years. Their new scholarship will support students underrepresented in the nurse anesthesia field. 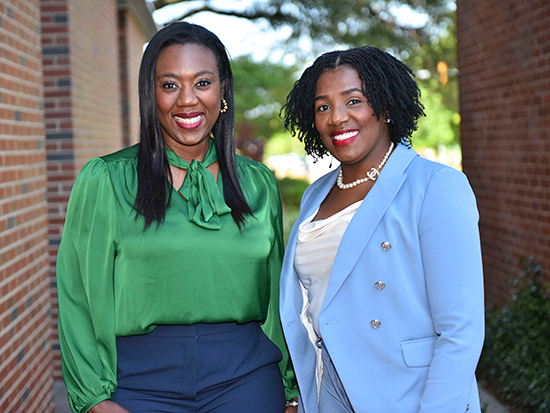 Thurston and Williams-Davis have served as certified registered nurse anesthetists at UAB Hospital-Highlands and UAB Hospital, respectively, for more than 10 years. They hope their scholarship will increase diversity within the nurse anesthesia profession by motivating and supporting students who are underrepresented in the field.

“LaDana and I have worked in many hospitals together over the years, and we still hear from patients that we are the only Black CRNAs they’ve ever seen and how great it is that they can relate to someone of the same culture and demographic,” Thurston said. “Depending on the literature you read, the percentage of Black CRNAs in the nation is 3 percent, and so anything we can do to help facilitate the matriculation into the program, we will do.”

“It always puts a patient at ease to see people who look like them and identify with them in a hospital because they know that they can relate to them in certain ways that they wouldn’t be able to in other situations,” Williams-Davis said. “Certain demographics use different terminologies, so having that diversity among the nurses and nurse anesthetists is important to ensure we are caring for the patient to the best of our abilities.”

Reflecting on her own student experience, Thurston credits her mentors and faculty from the UAB School of Nursing for keeping her motivated and helping her to be a successful CRNA.

Click here to apply to UAB and start your path to becoming a CRNA.

“I remember having a professor named Dr. Charlie Dickson and wanting to be just like her when I graduated,” Thurston said. “Having those role models that not only inspire you but also look like you is impactful when you never had nursing role models up to that point.”

Williams-Davis had a path different from Thurston’s and started her academic career later in life. She recognizes the positive impact financial help and scholarships can have on one’s career.

“I was a late bloomer to UAB. I came from a family that believed in going to work straight out of high school, and that just wasn’t the route I wanted to take,” Williams-Davis said. “I luckily met Charlie Cook and her husband, Judge Ralph Cook, and they said that if I maintained a 3.0 GPA they would financially support me through nursing school, and that was the start of my career as a nurse and later a nurse anesthetist.”

Those who wish to donate to the endowment can visit the UAB School of Nursing website.