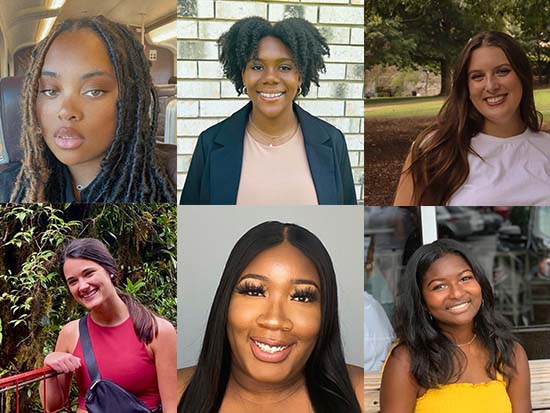 From left to right, top to bottom: Isabella Montgomery, Whitney Chaney, Lauren Pate, Nicollette Houston-Turner, Kieoynntice Smith, Danielle RussellNine University of Alabama at Birmingham students have been selected for the Benjamin A. Gilman International Scholarship. This is the largest cohort of recipients from UAB in a single application cycle. One additional student, Dallas Blackwell, has been selected for a Freeman Award for Study in Asia.

“We are so proud of our students’ receiving the Gilman Scholarship and Freeman-ASIA award,” said UAB Senior Vice President and Provost Pam Benoit, Ph.D. “Having the largest cohort of Gilman Scholarship recipients from UAB in a single application cycle demonstrates the caliber of our students. We celebrate their passion and readiness to make impactful connections with diverse cultures worldwide.”

Chaney, Villanueva, Mason, Montgomery and Houston-Turner are members of the UAB Honors College.

The Gilman Scholarship is sponsored by the United States Department of State’s Bureau of Educational and Cultural Affairs. The program aims to make study abroad experiences accessible to a more diverse population of students and gives students the opportunity to gain a better understanding of other cultures, countries, languages and economies — making them better prepared to assume leadership roles in government and the private sector.

The Freeman-ASIA program supports United States-based undergraduates with demonstrated financial need who are planning to study abroad in East or Southeast Asia. The program’s goal is to increase the number of U.S. citizens and permanent residents with firsthand exposure to and understanding of Asia and its people and cultures. From its inception in 2001, Freeman-ASIA has made study abroad in East and Southeast Asia possible for more than 5,000 U.S. undergraduates from more than 600 institutions.

“The Gilman Scholarship and Freeman-ASIA are life-changing opportunities, and not just in that they provide funding for international study,” said Michelle Cook, Ph.D., director of UAB’s Office of National and International Fellowships and Scholarships. “Gaining national recognition in this way empowers these students toward even greater things in the future.”

UAB’s Office of National and International Fellowships and Scholarships works closely with the UAB Education Abroad team to guide students through the scholarship process and help them manage the logistics of international travel.

“We’re excited to see so many students capitalizing on an education abroad experience with the support of the Gilman,” said Ashley Neyer, director of UAB Education Abroad.

“It is truly a team effort between the two offices and the students, and we’re proud of our awardees’ accomplishments. As we emerge from the pandemic, it is imperative that UAB students have cultural immersion experiences to become more global citizens in a world that has proved to be more interconnected than ever before.”

Students interested in learning more about nationally competitive scholarships, including Gilman and Freeman-ASIA, should contactfellowships@uab.edu for more information.