David G. Standaert, M.D., Ph.D., an internationally acknowledged expert in Parkinson’s disease and other movement disorders, has been named chair of the Department of Neurology at the University of Alabama at Birmingham. The appointment was effective Aug. 18, 2011. 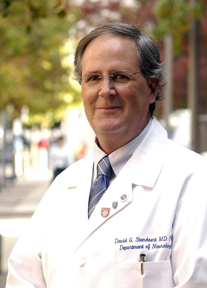 Standaert holds the John and Juanelle Strain Endowed Chair in Neurology and is the director of the UAB Center for Neurodegeneration and Experimental Therapeutics, the Division of Movement Disorders and the UAB Comprehensive Neuroscience Center. He served as interim chair of the department for the past year.

“As the interim chair, David has demonstrated an excellent leadership style, sound judgment, and a strategic vision for Neurology,” said Ray Watts, M.D., senior vice president and dean of the School of Medicine. “His efforts have served the department well, and will continue to benefit the department as he transitions to the role of permanent chair.”

Standaert received his undergraduate degree from Harvard College, and his medical and doctoral degrees from Washington University in St. Louis in medicine and pharmacology, respectively, in 1988. He completed a one-year internship in medicine at Jewish Hospital of St. Louis in 1989 and a three-year neurology residency in 1992 at the University of Pennsylvania. He completed a three-year research and clinical fellowship in neurology, specializing in movement disorders, at Harvard Medical School and Massachusetts General Hospital in 1995. He was a member of the faculty of Harvard Medical School for 14 years before relocating to UAB in 2006.

Standaert treats patients with Parkinson disease and other movement disorders, and has a laboratory research program which is seeking cures for Parkinson’s and other degenerative diseases. Since moving to UAB, he has taken the lead in building the UAB Center for Neurodegeneration and Experimental therapeutics, with advanced programs in Parkinson’s, Alzheimer's and Huntington’s disease as well as ALS (Lou Gehrig’s disease).

“I am honored to have been selected to lead the Neurology department,” Standaert said. “Our mission is to provide world-class care for neurological disorders in Alabama, and to lead the field towards a better future for those affected by brain diseases.”

Standaert is a member of the scientific advisory boards of the American Parkinson Disease Association and the Michael J. Fox Foundation for Parkinson’s Research. He is licensed to practice medicine in the states of Massachusetts and Alabama and was board certified in 1993 by the American Board of Psychiatry and Neurology.