Noted glaucoma physician Girkin takes the reins as chair of the Department of Ophthalmology at UAB.

Christopher A. Girkin, M.D., MSPH, has been named chair of the Department of Ophthalmology at the University of Alabama at Birmingham. Girkin, who has been interim department chair since October 2011, has been on the faculty at UAB since 1999. 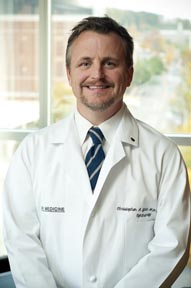 Girkin is an internationally known researcher and clinician in glaucoma, with research support from Research to Prevent Blindness, Eyesight Foundation of Alabama, Glaucoma Research Foundation and the National Eye Institute. He was awarded the American Glaucoma Society Clinician-Scientist Award for 2003 and 2004, the Research to Prevent Blindness Clinician-Scientist Award for 2005 and was selected as the EyeSight Foundation of Alabama Eminent Scholar for 2007. He has been included in the “Best Doctors in America” each year since 2003.

“Dr. Girkin has had a distinguished career as a physician-scientist at UAB, including leading the department as interim chair during the past year,” said Ray L. Watts, M.D, senior vice president and dean of the School of Medicine. “As interim chair, Chris has demonstrated an excellent leadership style, sound judgment and a strategic vision for the department.”

Girkin earned his medical degree from the University of Arkansas and did residency training at UAB from 1994 to 1997. He then completed a fellowship in neuro-ophthalmology at the Wilmer Eye Institute of the Johns Hopkins Hospital in Baltimore in 1998 and a second fellowship in glaucoma, supported by the Heed Foundation at the Glaucoma Research Center of the University of California, San Diego in 1999, before joining the UAB faculty.