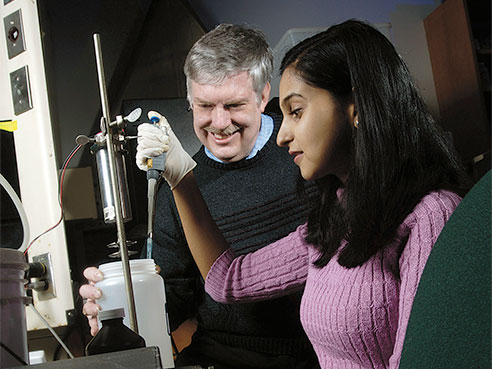 Robert W. Peters works in the lab with one of his students.Robert W. Peters, Ph.D., a professor in the University of Alabama at Birmingham’s Department of Civil, Construction and Environmental Engineering, recently received the 2014 Distinguished Service Award from the American Institute of Chemical Engineers (AIChE).

His nomination references those leadership positions within AIChE, while also acknowledging his longstanding dedication to the division’s student program and his editorship of the journal “Environmental Progress.”

“This is a much deserved honor for Dr. Peters, whose work in environmental engineering has long been recognized among his peers throughout the country,” said Department Chair Fouad Fouad, Ph.D. "This prestigious distinction is a point of pride to the Department of Civil, Construction and Environmental Engineering.”