by Tyler Greer
The Compleat Physician Award is given each year to a U.S. physician who embodies medical excellence and humane and ethical care. 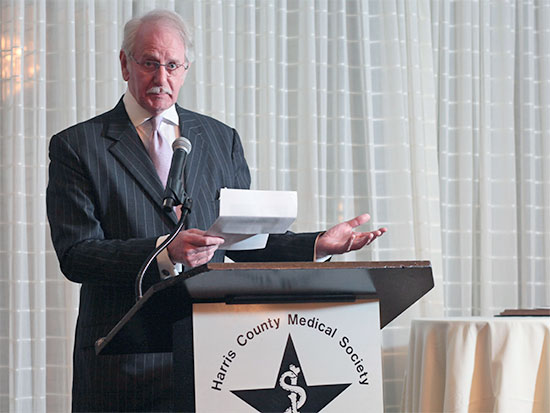 Cooper is the 25th recipient of the national award, which was named after its first recipient and has been given annually since 1994 to recognize a physician who embodies the ideals of Sir William Osler — medical excellence, humane and ethical care, commitment to medical humanities and writing, research, and harmony between the academic and medical practitioner. Cooper was bestowed the honor during the HCMS/HAM Installation of Officers and Leadership Recognition.

A Jacksonian Prize and Medal recipient by the Royal College of Surgeons of England, Cooper is a pioneering xenotransplantation researcher and heart transplant surgeon who joined the University of Alabama at Birmingham School of Medicine on Nov. 1, 2016, as co-director of UAB’s xenotransplantation program. Cooper is a professor in the Department of Surgery and has a long and distinguished career dating back to his days at Guy’s Hospital Medical School in London (now merged with King’s College London), where he trained in general and cardiothoracic surgery. Cooper was present at the first heart transplant in the United Kingdom in 1968 and was a member of the team that initiated the heart transplant program at Papworth Hospital in 1979.