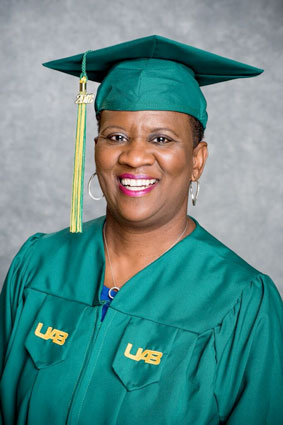 When Birmingham native Carla Youngblood walks across the stage for spring commencement at the University of Alabama at Birmingham’s Bartow Arena on Saturday, April 28, she will receive a Bachelor of Arts degree in communication studies that she earned while battling breast cancer.

Youngblood, a certified public accountant, decided to go back to school after being diagnosed with breast cancer in October 2015. She began treatment one month later and went on to enroll at UAB in January 2016 as a non-degree-seeking student in the UAB College of Arts and Sciences.

“I had an interest in learning about television and film production,” Youngblood said. “I was also going through chemotherapy, so I figured I would take some classes to keep busy and to keep my mind off everything I was going through. Initially, obtaining a second degree was not the goal; but after meeting with an adviser, I learned I only needed a few more classes in order to obtain a degree so I figured, ‘why not?’”

“Being on a college campus made me feel good,” Youngblood said. “Being in the classroom was exciting. I realized that life itself teaches you things that go a long way in helping you understand other concepts in an academic setting. I think that, if had I tried to learn certain things 20 years ago, I would not have grasped the concepts as quickly as I did after returning to the classroom after more than 15 years.”

Continuing her education was a part of her healing process, and so was comedy. Her journey with comedy began seven years ago when she participated in a fundraiser called “Realtor's Got Talent,” hosted by the Birmingham Association of Realtors at the Stardome Comedy Club in Hoover, Alabama. She had long dreamed of being on stage. After a successful performance, she adopted the stage name “The Truth” and began doing shows at other clubs in Birmingham and around the Southeast.

Early on in her treatment process, Youngblood began making jokes to lighten the mood in the room with other cancer patients. She eventually turned her experience into a comedy show called “The Truth About Breast Cancer,” which debuted at the historic Carver Theatre in October 2016. Now, Youngblood and has taken the show on the road, and she has received a lot of positive feedback.

“The response has been refreshing,” Youngblood said. “Many of the people in the audience are cancer survivors. People who are in the midst of treatment say my humor gives them a different perspective. No one has been offended by it because they can relate to it, and they know I have gone through it myself. I am telling my story, but people who have had any form of cancer can relate to it.”

In addition to comedy, she also accepts speaking engagements and volunteers with the Forge Breast Cancer Survivor Center. As a Forge advocate, she is paired with women who are currently battling breast cancer to provide support and encouragement during the treatment process.

“My advice to anyone who is juggling a lot in life or dealing with a difficult medical diagnosis is to live in the present, get an understanding of exactly what you are dealing, then set your sights on your end goal — whatever it may be,” Youngblood said. “My end goal was to survive cancer, be healed and share light with someone else.”

With her new-found knowledge of video production and broadcasting, Youngblood hopes to obtain a job as a television show host doing human interest and community news stories.