by Bob Shepard
UAB researchers have found a previously unknown gene variant that appears to contribute to movement disorders. 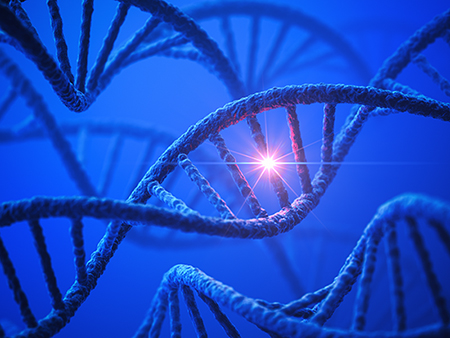 UAB researchers have found a previously unknown gene variant that appears to contribute to movement disorders.The Undiagnosed Diseases Program at the University of Alabama at Birmingham recently found a previously unknown genetic variant that is believed to account for a severe movement disorder in a young woman. In a case study published in the Sept. 9, 2019 issue of Neurology®, the journal of the American Academy of Neurology, the research team reports on the discovery of the variant, and describes the steps taken to unlock this medical mystery.

The patient, a woman in her 20’s, first began to develop impairment of her lower limbs at age 5. By adulthood, she could no longer walk, and had hand tremor, large spasms of her legs in the evenings, intermittent slurred speech and occasional tingling in her fingers and toes.

She underwent evaluation at UAB’s Undiagnosed Diseases Program, in the Department of Genetics, which is a court of last resort for those cases where a diagnosis has not been made despite extensive efforts by medical professionals.

“We have resources and expertise that can be brought to bear in these cases,” said Bruce Korf, M.D., Ph.D., UAB’s chief genomics officer and director of the UDP. “Our hope is to be able to provide answers that have eluded the best efforts employed to date.”

After an exhaustive review of symptoms and family history, and multiple tests to rule out other options, the patient underwent whole genome sequencing and variant analysis at HudsonAlpha Institute for Biotechnology. The sequencing revealed a never-before described mutation in the ADCY5 gene. Other variants of that gene has been associated with childhood movement disorders. Testing of the parents indicated that the variant was not present in either, indicating it was a spontaneous mutation in the woman.

“For these combined reasons, the variant was predicted to be the likely cause of the woman’s condition according to the guidelines of the American College of Medical Genetics and Genomics,” said Marissa Dean, M.D., assistant professor in the Department of Neurology and the first author of the case study. “We were ultimately able to give the family of diagnosis of dystonia with spastic paraparesis, likely due to the variant in the ADCY5 gene.”

Dean says that while there is no treatment to reverse the condition, simply having a diagnosis often gives patients and families closure and relief. Dean is overseeing supportive therapy for the patient, including physical and occupational therapy and medications to treat muscle spasms and stiffness.

“The conditions seen by the UDP are rare, so the discovery of a new variant of a gene is extremely important,” Korf said. “Every piece of information that we can decipher sheds a bit more light on our understanding of genetic disease.” 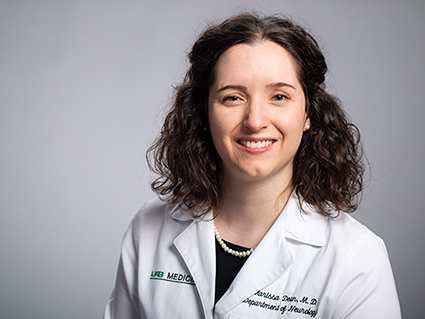 Marissa Dean, M.D., assistant professor in the Department of Neurology “It’s important to understand all we can about these types of conditions,” Dean added. “How many people are affected? Are there environmental or other factors that contribute?  Until we better understand the basis of the disease, we cannot begin to understand what might work as cure or treatment.”

The case study provides an in-depth review of the process followed by the UDP team to reach their diagnosis, including magnetic resonance imaging, medications and an extensive workup that involved metabolic and heavy metal screening, cerebral spinal fluid analysis, electromyography, nerve conduction studies and muscle biopsy.

The team considered — and ultimately ruled out — a wide variety of neurodegenerative and metabolic disorders.

“Accurate identification of the effects and symptoms in each case is invaluable in guiding further workup and management,” Dean said. “We recommend that for a patient presenting with childhood onset spastic paraparesis, MRI should be included in the initial workup. In addition, treatable conditions need to be considered until evidence is available confirming or refuting their presence. Whole genome sequencing may be a helpful tool to identify rare disorders.”

Because of the discovery of this novel mutation, the case study also calls for the addition of ADCY5 to gene sequencing test panels for spastic paraparesis.

The UAB Undiagnosed Diseases Program includes a designated certified genetic counselor and a clinical nurse coordinator. Physicians from various subspecialties, in such areas as radiology, rheumatology and neurology, serve as consultants and provide their expertise as needed. The program, one of the only such efforts based at an academic medical center, is modeled on a similar program at the National Institutes of Health.