A UAB pediatric oncologist will conduct a first-in-human immunovirotherapy study of an oncolytic herpes virus inoculated in the cerebellum. 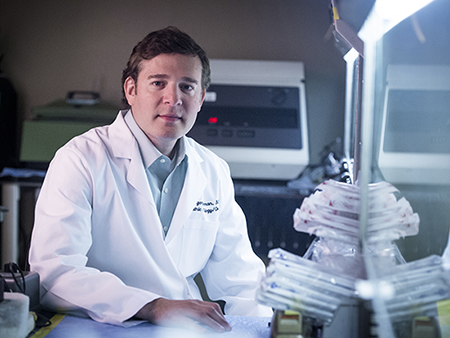 Gregory Friedman, M.DGregory Friedman, M.D., has been awarded a three-year, $750,000 R01 grant from the U.S. Food and Drug Administration for a Phase 1 immunotherapy clinical trial of engineered cold-sore (herpes) virus G207 for the treatment of malignant cerebellar brain tumors in children.

Friedman and his team have nearly completed a Phase 1 Study of G207 in pediatric high-grade gliomas and continue to work to advance the therapy to a Phase 2 clinical trial based on the promising results to date. His lab data indicates that pediatric tumors, which commonly arise in the back of the brain or cerebellum, may be even more sensitive to the virotherapy than high-grade gliomas.

This grant will help Friedman’s team conduct the new Phase 1 study in recurrent tumors in that area of the brain.

“There are unique challenges to treating tumors in the cerebellum, and this will be a first-in-human study of an oncolytic herpes virus inoculated in that location,” Friedman explained. “Previously, all studies using similar viruses have focused on tumors either outside of the brain or in the cerebrum, the main part of the brain. This grant will enable us to treat more children with this exciting immunovirotherapy and hopefully help us advance the therapy to treat many different types of tumors.”

Standard therapies such as chemotherapy and radiation are very damaging to a child’s developing brain and too often are ineffective. Viral immunotherapy offers a potentially targeted, less toxic and more effective approach. G207 is a herpes virus that has been genetically altered so that it does not harm normal cells but can infect and kill tumor cells. When infused into a malignant brain tumor, the virus enters tumor cells and replicates. It then kills the cells and releases the virus’s progeny to infect and kill other tumor cells nearby. Importantly, the virus also induces a strong immune response by the body’s immune system, which can then attack and kill the tumor and potentially prevent tumor progression or recurrence.

The primary goal of this grant for Friedman and his team is to demonstrate the safety and tolerability of the treatment in children with malignant cerebellar brain tumors. Their secondary aims are to assess the effectiveness of the therapy and the immune response generated by the treatment.

The grant is from the Orphan Products Clinical Trials Grants Program, funded by Congress to encourage clinical development of drugs, biologics, medical devices and medical foods for the treatment of rare diseases.