by Bob Shepard
UAB will be part of a new neuroscience research consortium sponsored by the National Institutes of Health. 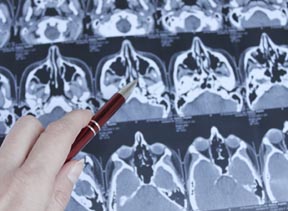 “NeuroNEXT is a conduit for translational research — taking new discoveries from the laboratory bench and translating them into therapies for patients,” said L. Burt Nabors, M.D., professor of neurology and principal investigator for UAB. “The network should speed the process and make it easier to launch clinical trials of promising new medications and more quickly gauge their effectiveness.”

Network members will meet regularly to chart the course of neuroscience research across the nation. Member institutions will be able to join trials proposed by others in NeuroNEXT, which will help create the critical mass of patients needed to quickly and efficiently determine if a new therapy is working.

“It won’t be just UAB testing a new medication for Parkinson’s disease, for example,” said Nabors. “NeuroNEXT members around the country will be able to easily join a study, allowing investigation in a large number of diverse patients that should produce quicker, more complete results.”

Nabors and co-principal investigator Khurram Bashir, M.D., associate professor of neurology, say that UAB’s long-standing track record for neuroscience research is key to the university’s inclusion in the network.

“UAB is known for excellence in neurology, neurosurgery and neurobiology,” said Bashir. “Our commitment to translational research is strong. And we are geographically positioned to recruit previously under-studied ethnic populations.”

NeuroNEXT also includes a clinical coordinating center and a data coordinating center. Each clinical site will work under a seven-year grant, at just under $300,000 per year for administrative costs. Centers must achieve certain milestones along the way to remain in the network, including participating in trials and meeting recruitment goals.