For the first time, University of Alabama at Birmingham researchers identified protein-binding sites on molecules known to cause kidney failure in multiple myeloma patients and demonstrated that a peptide can prevent that binding in an animal model. 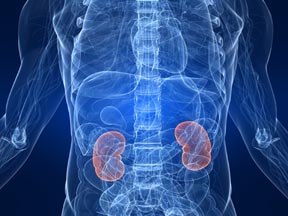 Researchers say this could pave the way for drug development to delay or prevent this deadly complication in their study findings published online in the Journal of Clinical Investigation April 9, 2012, and slated for the journal’s May print edition.

“If a patient develops severe acute kidney injury, their life span is significantly shorter,” says lead author Paul Sanders, M.D., professor of medicine in the UAB Division of Nephrology. “Until now, the entire process by which this occurs has been unknown. With the publication of this study, I am hopeful a compatible inhibitor can be designed to help these patients.”

Multiple myeloma, a cancer of the bone marrow, accounts for slightly more than 1 percent of all cancer diagnoses and about 12 percent of all blood cancer diagnoses in the United States. Myeloma kidney, a condition also known as cast nephropathy, is a common complication; proteins usually eliminated by the kidneys are overproduced because of the cancer and the build up leaves the kidneys unable to filter and organ injury and failure often result.

Nearly half of multiple myeloma patients will develop kidney failure — most caused by cast nephropathy. Renal failure may be severe but potentially reversible if treated early in more than 20 percent of patients. But, despite more than 40 years of advances in the treatment of both multiple myeloma and kidney failure, the outcomes for myeloma patients with severe acute kidney injury are poor.

Sanders says the advancements made in cancer treatment improve the likelihood a patient will go into remission, but the complications caused by cast nephropathy can make multiple myeloma deadly.

“In one study, the survival rate for multiple myeloma is reduced to about 10 months if a patient has associated renal failure, compared to three to four years for myeloma patients without renal failure,” Sanders says.

Sanders says the development of cast nephropathy is directly related to the production of free light chains, which are normal components of immunoglobulin, a large Y-shaped protein produced by B-cells used by the immune system to identify and neutralize foreign objects such as bacteria and viruses. These free light chains bind with Tamm-Horsfall glycoprotein, the most abundant protein in urine, causing a gel-like substance to form, obstructing flow in the kidneys as the body tries to filter it from the blood.

Using several experimental approaches, the research team analyzed the binding interaction between the free light chains and the Tamm-Horsfall glycoproteins and found the site that the molecular interaction occurred. They used this information to develop a cyclized peptide that prevents the bond between the proteins in the rats and inhibited cast nephropathy in the rat model. The cyclized peptide was easily absorbed into the kidney, and it allowed the kidneys to filter despite the presence of the toxic free light chain.

“Further, the data support a clinically relevant approach to the management of renal failure in multiple myeloma. Now that we know where and how to target these proteins, we have the groundwork for doing the same thing in humans.”

Sanders says the next steps include modeling all of the compounds involved in the creation of the cyclized peptide. By doing this, he and his research team hope to find an already-approved compound that mimics this process, enabling a protein inhibitor to get to patients quicker.

The National Institutes of Health’s National Institute of Diabetes and Digestive and Kidney Disease George M. O’Brien Kidney and Urology Research Centers program and the Office of Research and Development, Medical Research Service, Department of Veterans Affairs, Birmingham, Ala., funded this research.