A UAB-led, global consortium has earned a $7 million renewal of its grant to deploy quickly the first meaningful drug trials against three rare and devastating diseases. 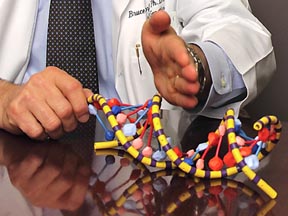 The Neurofibromatosis Clinical Trials Consortium, funded by the U.S. Department of Defense since 2007, seeks to develop better treatments for neurofibromatosis 1 and 2 and schwannomatosis — three related genetic conditions first diagnosed for many in childhood.

“We are tremendously grateful to be able to continue this work. Life for these patients is at best an anxious wait for the next complication and at worst a long trial of recurrent surgery, progressive loss of function or even death,” said Bruce Korf, M.D., Ph.D., chair of the Department of Genetics at the University of Alabama at Birmingham and principal investigator for the consortium.

The conditions cause non-cancerous tumors to arise from nerves and press on surrounding tissue. This affects each person differently, but can cause blindness, hearing loss, learning disabilities, pain or deformity.

“The hope of these patients and families rests with the development of new treatments based on modern medicine, but the search for treatments could not even begin until we had a system in place capable of asking the right questions,” Korf says.

Before its genetic mechanisms were revealed, researchers had no rational way of identifying new treatments for neurofibromatosis. Physicians did their best to surgically remove recurring tumors, manage pain and apply chemotherapy in the relatively rare cases where tumors turn cancerous. Since then, new drug targets emerged to make possible the launch of effective clinical trials.

Designers of these trials, however, had to grapple with the rarity and complexity of the disorders.  No single center can recruit enough patients to complete a clinical trial for most of the complications. Add to that the unpredictable course of neurofibromatosis and that no two persons are affected in the same way, and the challenges become clear.

Leaders of several NF clinical centers in the United States and one in Australia established the consortium to remedy these problems. Their combined expertise and the size of their combined patient populations positioned the consortium to launch three clinical trials in its first five years with another about to begin, and helped it gain funding for an additional five years. It has also committed to starting at least four additional trials for all forms of neurofibromatosis.

Though the nature of the diseases erects barriers to research, it also comes with a fortunate turn. By coincidence, the gene responsible for NF1 also encodes a protein that regulates another protein, RAS, which is known to drive abnormal growth in common cancers.

The pharmaceutical industry already had developed drugs to influence RAS by the time research revealed it also played a role in NF1, including rapamycin — also called sirolimus. This work saved NF researchers many years and large sums of money.

Rapamycin shuts down a protein called mTOR that is used by RAS to pass on growth signals to cells. Three of the first four consortium-funded clinical trials will test rapamycin or its derivative, everolimus, to see if it can reverse or slow various aspects of NF.

A fourth trial is examining the use of the anti-cholesterol drug lovastatin in the treatment of learning problems in children with NF1. The RAS gene is anchored to cell membranes by a cholesterol-like molecule, and lovastatin may be able to block the binding of RAS to the membrane and reduce excessive RAS signaling.

To build the consortium, Korf tapped experts worldwide to form committees that track advances in disease biology and emerging drugs, and organized a central operations center to manage logistics, budgets and regulatory compliance. He also combined his disease expertise with that of a clinical trialist, an expert in statistics and the regulatory environment. Gary Cutter, Ph.D., director of the Section on Research Methods and Clinical Trials within the Department of Biostatistics at the UAB School of Public Health, plays that data management and analysis role.

“We dearly hope the treatment works in each trial, but there is also value in decisively ruling out compounds,” Korf said.

“There are many drugs that make sense to try against NF, so we want to move down the list as quickly as we can. It also is noteworthy that NF serves as a good model of how tumors form thanks to mistakes in a single gene. We may gain insights into how common tumors grow as we seek to improve quality of life for those with NF.”