by Jim Bakken
Intensive lifestyle interventions can put Type 2 diabetes into remission, eliminate need for medication, according to a new study.

New research co-authored by a University of Alabama at Birmingham (UAB) researcher and published online Dec. 19 in the Journal of the American Medical Association (JAMA), has shown that intensive lifestyle interventions, including diet and exercise, have the potential to put Type 2 diabetes into remission and eliminate the need for medication in some cases. 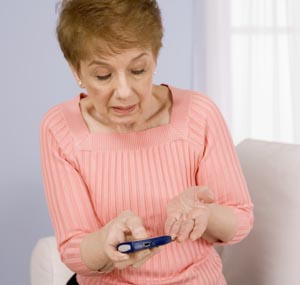 Remission is described by the researchers as transition from meeting diabetes criteria to a pre-diabetes or non-diabetic level of glucose in the blood. The non-diabetic level is a fasting glucose level of less than 126 mg/dL, a HbA1c level of less than 6.5 percent and no use of diabetes medication. The HbA1c test reflects the average amount of glucose in the blood over the past three months.

Type 2 diabetes is the most common form of the disease and affects more than 20 million Americans. While there are many causes of Type 2 diabetes, including environmental and genetic factors, obesity and lack of physical activity are by far the most common reasons for developing the disease. Historically, diabetes has been considered a chronic, progressive, incurable condition requiring aggressive risk factor management to stave off cardiac and other complications.

“Since so much of Type 2 diabetes is related to lifestyle, the idea of reversibility is plausible, and studies from the surgical literature support this,” said study co-author Monika Safford, M.D., professor in the UAB Division of Preventive Medicine and senior scientist in the UAB Comprehensive Diabetes Center. “Reversing diabetes through weight loss and exercise is a much less invasive approach and may be a more attractive option for many people. This is very exciting news for supporters of public health policies that encourage people to lose weight and increase their physical activity.”

Look AHEAD recruited 5,145 overweight adults aged 45 to 76 years with Type 2 diabetes at 16 U.S. research centers. Participants were randomized to either an intensive, lifestyle-based weight-loss intervention or to a diabetes support and education intervention. The intensive lifestyle intervention aimed to reduce total caloric intake to between 1,200 and 1,800 calories per day, to reduce total and saturated fat intake and to increase physical activity levels to a goal of 175 minutes per week. Liquid meal replacements also were provided to assist dietary goals.

“We also found in both groups that participants were more likely to have diabetes remission if they had diabetes for only a few years, had a lower HbA1c at study enrollment, and were not using insulin when they enrolled in the study,” Safford added. “It’s good news that we have shown diabetes is something that can be reversed; however, when you look at the entire study period, many participants who initially showed a reversal did eventually require diabetes medications again.”

Nevertheless, these findings are important, Safford said. They show that reversal of diabetes is a goal that can be reached for some people living with Type 2 diabetes — and stopping medication even for a few years can have a major positive impact on quality of life.

“The ability to eliminate all diabetes medications while maintaining sub-diabetic blood glucose and HbA1c levels should considerably reduce related adverse drug side effects, risks of hypoglycemia, hyperglycemic symptoms and also reduce medication costs,” Safford said. “In addition, prior studies of medication-based therapy have shown that sustained reductions in HbA1c and fasting glucose can considerably reduce or delay many of the complications of diabetes, such as eye disease, kidney disease and nerve damage, as well as reduce the need for hospitalization.”

Note: In October 2012, after eight to 11 years of participant follow-up, the Look AHEAD intervention arm was stopped by the study sponsor when it was determined that intensive lifestyle interventions did not decrease the occurrence of cardiovascular events, the primary trial outcome.