A study in mice with genetic mutations seen in human Alzheimer's disease found that the feeling of hunger itself may protect against the disease.

The feeling of hunger itself may protect against Alzheimer’s disease, according to study published today in the journal PLOS ONE. Interestingly, the results of this study in mice suggest that mild hunger pangs, and related hormonal pathways, may be as important to the much-discussed value of “caloric restriction” as actually eating less. 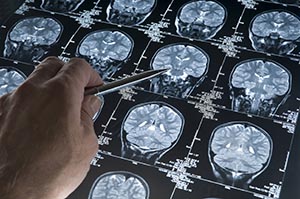 Caloric restriction is a regimen where an individual consumes fewer calories than average, but not so few that they become malnourished. Studies in many species have suggested that it could protect against neurodegenerative disorders and extend lifespans, but the effect has not been confirmed in human randomized clinical trials.

Efforts to understand how cutting calories may protect the brain have grown increasingly important with news that American Alzheimer's deaths are increasing, and because the best available treatments only delay onset in a subset of patients.

Study authors argue that hormonal signals are the middlemen between an empty gut and the perception of hunger in the brain, and that manipulating them may effectively counter age-related cognitive decline in the same way as caloric restriction.

“This is the first paper, as far as we are aware, to show that the sensation of hunger can reduce Alzheimer’s disease pathology in a mouse model of the disease,” said Inga Kadish, Ph.D., assistant professor in the Department of Cell, Developmental and Integrative Biology (CDIB) within the School of Medicine at the University of Alabama at Birmingham. “If the mechanisms are confirmed, hormonal hunger signaling may represent a new way to combat Alzheimer’s disease, either by itself or combined with caloric restriction.”

The team theorizes that feeling hungry creates mild stress. That, in turn, fires up metabolic signaling pathways that counter plaque deposits known to destroy nerve cells in Alzheimer’s patients. The idea is an example of hormesis theory, where damaging stressors like starvation are thought to be good for you when experienced to a lesser degree.

To study the sensation of hunger, the research team analyzed the effects of the hormone ghrelin, which is known to make us feel hungry. They used a synthetic form of ghrelin in pill form, which let them control dosage such that the ghrelin-treated mice felt steadily, mildly hungry.

If it could be developed, a treatment that affected biochemical pathways downstream of hunger signals might help delay cognitive decline without consigning people to a life of feeling hungry. Straight caloric restriction would not be tolerable for many persons over the long-run, but manipulating post-hunger signaling might.

This line of thinking becomes important because any protective benefit brought about by drugs or diets that mildly adjust post-hunger signals might be most useful if started in those at risk as early in life as possible. Attempts to treat the disease years later – when nerve networks are damaged enough for neurological symptoms to appear – may be too late. In the current study, it was long-term treatment with a ghrelin agonist that improved cognitive performance in mice tested when they had reached an advanced age.

The study looked at whether or not the feeling of hunger, in the absence of caloric restriction, could counter Alzheimer’s pathology in mice genetically engineered to have three genetic mutations known to cause the disease in humans.

Study mice were divided into three groups: one that received the ‘synthetic ghrelin’ (ghrelin agonist), a second that underwent caloric restriction (20 percent less food) and a third group that was fed normally. Study measures looked at each group’s ability to remember, their degree of Alzheimer’s pathology and their level of related, potentially harmful immune cell activation.

Results of such studies are most appropriately presented in terms of general trends in the data and statistical assessments of their likelihood if only chance factors were in play, a trait captured in each result’s P value (the smaller the better). Thus, the first formal result of the study are that, in mice with the human Alzheimer’s mutations, both the group treated with the ghrelin agonist LY444711 and the group that underwent caloric restriction performed significantly better in the a water maze than did than mice fed normally (p=0.023).

The water maze is the standard test used to measure mouse memory. Researchers put mice in a pool with an invisible platform on which they could rest, and measured how quickly the mice found the platform in a series of tests. Mice with normal memory will remember where the platform is, and find it more quickly each time they are placed in the pool. Ghrelin agonist-treated mice found the hidden platform 26 percent faster than control mice, with caloric restricted mice doing so 23 percent faster than control mice.

The second result was a measure of the buildup of a cholesterol-related protein called amyloid beta in the forebrain, an early step in the destruction of nerve cells that accompanies Alzheimer’s disease. The formal amyloid beta results show that mice either treated with the ghrelin agonist or calorically restricted had significantly less buildup of amyloid beta in the dentate gyrus, the part of the brain that controls memory function, than mice fed normally (i.e., control, 3.95±0.83; LY, 2.05±0.26 and CR, 1.28±0.17%, respectively; Wilcoxon p=0.04).

The above results translate roughly into a 67 percent reduction of this pathology in caloric-restricted mice as compared to control mice, and a 48 percent reduction of amyloid beta deposits when comparing the ghrelin-treated mice with the control group. These percentages are neither final nor translatable to humans, but are simply meant to convey the idea of “better.”

Finally, the team examined the difference in immune responses related to Alzheimer’s pathology in each of the three groups. Microglia are the immune cells of the brain, engulfing and removing invading pathogens and dead tissue. They have also been implicated in several diseases when their misplaced activation damages tissues. The team found that mice receiving the ghrelin agonist treatment had both reduced levels of microglial activation compared to the control group, similar to the effect of caloric restriction.

The ghrelin agonist used in the study does not lend itself to clinical use and will not play a role in the future prevention of Alzheimer’s disease, said Kadish. It was meant instead to prove a principle that hormonal hunger signaling itself can counter Alzheimer’s pathology in a mammal. The next step is to understand exactly how it achieved this as a prerequisite to future treatment design.

Ghrelin is known to create hunger signals by interacting with the arcuate nucleus in the part of the brain called the hypothalamus, which then sends out signaling neuropeptides that help the body sense and respond to energy needs. Studies already underway in Kadish’s lab seek to determine the potential role of these pathways and related genes in countering disease.

“Our group in the School of Public Health was studying whether or not a ghrelin agonist could make mice hungry as we sought to unravel mechanisms contributing to the life-prolonging effects of caloric restriction,” said David Allison, Ph.D., associate dean for Science in the UAB School of Public Health and the project’s initiator.

“Because of the interdisciplinary nature of UAB, our work with Dr. Allison led to an amazing conversation with Dr. Kadish about how we might combine our research with her longtime expertise in neurology because caloric restriction had been shown in early studies to counter Alzheimer’s disease,” said Emily Dhurandhar, Ph.D., a trainee in the UAB Nutrition Obesity Research Center and first study author. “The current study is the result.”

Eli Lilly donated of the ghrelin agonist used in the study. This work was also supported by Alzheimer’s of Central Alabama, the National Institutes of Health Obesity Training Grant (T32DK062710), and the National Institutes of Health Behavioral Assessment Core of UAB (P30 NS47466). Allison disclosed consulting relationships with industry, the details of which are included in the PLOS ONE article.