In this preliminary analysis, the study treatment neither built up in organs and nor destroyed the bone marrow’s ability to make blood cells.

An experimental treatment that combines a cell-killing radioactive particle with an antibody that homes in on cancer cells is safe in the treatment of cancers spreading through patients’ abdomens, according to data from a first-in-human study presented today at the Society of Nuclear Medicine and Molecular Imaging annual meeting in Vancouver. 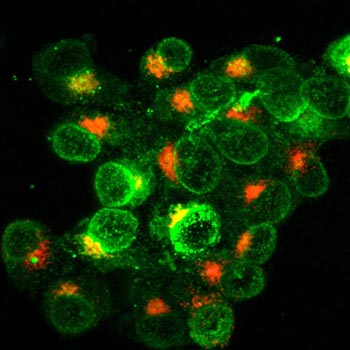 The results are from an ongoing phase I clinical trial at the University of Alabama at Birmingham (UAB) designed to measure the safety of the treatment as opposed to its effectiveness. When complete, the study will have treated 18 patients with a combination of the FDA-approved antibody-based cancer treatment Herceptin (trastuzumab) and the radioactive material lead-212. At the time of the presentation, eight of the 18 had received treatment, and fully analyzed data will be presented for three patients.

The Herceptin antibody attaches itself to the HER-2 protein, which occurs more often on cancer cell surfaces, to stop signals that encourage cancerous growth. In theory, radioactive material attached to the antibody should cut up DNA in HER-2-positive cancer cells, causing them to self-destruct.

“By killing cancer cell by cell, our approach promises to be useful against metastases that have spread along the lining of the abdomen,” said Ruby Meredith, M.D., Ph.D., professor in the UAB Department of Radiation Oncology and a senior scientist in the UAB Comprehensive Cancer Center. “So far we have only preliminary data in a few patients. Should further studies prove this combination treatment to be safe and effective, however, it could be useful against the forty percent of HER-2 expressing ovarian and gastric cancers, while sparing normal tissues.”

In this preliminary analysis, the study treatment neither built up in organs and nor destroyed the bone marrow’s ability to make blood cells – problems that limited the dose in past attempts to combine antibodies and radioisotopes. Given the safety demonstrated in the first group of patients, and in keeping with U.S. Food and Drug Administration guidelines, the plan is now to raise the dose in the next group of patients according to approved protocol.

Alpha particle experiments go back to the 1960s, with several researchers, including Martin Brechbiel at the National Cancer Institute, combining alpha emitters with antibodies as early as the late 1980s.

Radioactive materials have unstable atomic structures that shed high-energy particles in a process called decay at fixed rates measured in half-lives, the time it takes for half of a quantity of material to become stable. Among the first decay processes discovered were alpha and beta decay, which emit different kinds of high-energy, subatomic building blocks.

With an average half-life of 6.7 days, beta emitters looked to be more useful at first. They remained radioactive long enough to be shipped and introduced into patients. They passed through thousand cells before coming to a halt, suggesting they could kill many cancer cells inside large tumors. On the downside, they came with sustained, off-target radiation exposure that dramatically limited their safe dose.

The field had long discussed using alpha emitters instead because they strike nearby cells with greater power, have shorter half-lives for less off-target exposure and penetrate just a few cells before coming to a halt. Unfortunately, the first alpha emitters identified had inappropriate half-lives and were tricky and expensive to produce.

Enter study sponsor AREVA Med, the company that built a system for consistent delivery of pure radium-224 that decays into lead-212 in the time it takes to ship it to any hospital in the world (about 36 hours). Lead-212 is not an alpha emitter, but decays into bismuth-212 which emits alpha particles and then becomes inert within an hour of being introduced to the body.  According to the data so far, this spares bone marrow, organs and normal cells.AREVA Med asked UAB to undertake the current study because of Meredith’s clinical trial expertise within the UAB cancer center.

The trial was open to all patients with HER-2 positive cancer, but seven out of the first eight patients happened to have ovarian cancer. All patients underwent extra rounds of imaging to ensure that the radioactivity stayed in the abdomen, close to where metastases occur around primary gastric and ovarian tumors. Researchers watched for signs of long-term toxicity for six months after treatment, but found none. Patients in the study had failed on previous therapies.

Along with Meredith, Sui Shen, Ronda Carlise, Patty Bunch, Souheil Saddekni, Daniel Yoder and Ronald Alvarez at UAB , as well as Julien Torgue and Eileen Banaga at AREVA Med, were study authors. The study was sponsored by AREVA Med and a grant from the National Institutes of Health to the UAB Center for Clinical and Translational Science (1UL1RR025777). The Herceptin used in the trial was provided by Genentech.

Those interested in enrolling in the study can visit www.targetedtrials.com or contact Patty Bunch at 205-934-6172 or pbunch@uabmc.edu.