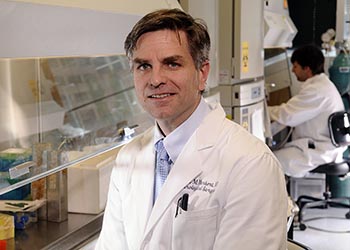 Researchers at the University of Alabama at Birmingham report a genetically engineered herpes simplex viral therapy is safe when used in conjunction with radiation in the treatment of malignant gliomas, one of the most deadly forms of brain cancer.

The virus, G207, is a modified herpes simplex virus that in two previous UAB studies has been shown to be safe when used as a sole therapy. The new findings, published April 8, 2014 in Molecular Therapy, indicate the virus is also safe when used in combination with low doses of radiation therapy.

The study examined nine patients with malignant glioma, and all nine tolerated the therapy well. None developed encephalitis, the brain inflammation often associated with herpes simplex; the gene responsible for causing encephalitis has been removed from G207. Some patients also showed evidence of tumor reduction, and survival rates were increased for others.

“This was a phase one study designed foremost to see whether the therapy was safe,” said James M. Markert, M.D., Ph.D., professor and chair of the Department of Neurosurgery at UAB and the study’s first author. “While this study, with a limited number of patients and no controls, prevents any conclusions about the efficacy of this treatment, the decrease in tumor size seen on MRI’s in some patients, as well as an increase in survival in some patients without other proven treatment options, is highly encouraging.”

G207 was administered directly to glioma cells in the brain, followed the next day by a low-dose radiation treatment.

The virus works by infecting tumor cells and replicating until it overwhelms the cell’s machinery and causes the cell to rupture and die, releasing new viral particles. The virus has been genetically modified so that it can reproduce only in tumor cells, which lack the stronger antiviral defense mechanisms of healthy brain cells. After destroying a tumor cell, the virus moves on, looking for new tumor cells to infect.

While the study was designed for each patient to receive one dose of G207, two of the nine patients received a second dose as part of a compassionate-use protocol.

“While we cannot draw any firm conclusions from just two study subjects, we are encouraged to note that both of the compassionate-use patients tolerated the second dose extremely well, indicating that the drug may be suitable for multiple use,” said Markert.

UAB is gearing up for another study with a new modified version of herpes simplex virus called M032. Preliminary studies have indicated M032 could be an even more effective therapy. It includes a genetically engineered protein called IL12, which the researchers believe will induce a stronger immune response and will contribute to increased anti-angiogenesis, the process of shutting off the blood supply to tumor cells, denying oxygen and essential nutrients.

“This study showed the safety and the potential for clinical response of single-dose HSV therapy augmented with radiation in the treatment of malignant glioma patients,” said Markert. “Additional studies with modified viruses such as G207 in the treatment of human glioma are certainly warranted from the results of this trial.”

Gliomas account for about a third of brain tumors, and survival rates are poor; only about half of the 10,000 Americans diagnosed with malignant glioma survive the first year, and only about one-quarter survive for two years.