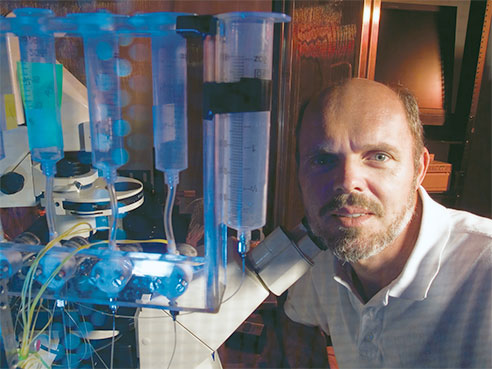 Researchers at the University of Alabama at Birmingham have shed new light on how cells called gliomas migrate in the brain and cause devastating tumors. The findings, published June 19, 2014 in Nature Communications, show that gliomas — malignant glial cells — disrupt normal neural connections and hijack control of blood vessels.

The study provides insight into the mechanisms of how glioma cells spread throughout the brain as a devastating form of brain cancer, and potentially offers a tantalizing opportunity for therapy.

A hallmark of gliomas is that the cells can migrate away from a central tumor, invading healthy brain tissue. Even if a tumor mass is surgically removed, malignant cells that have migrated are left behind, and can grow into a new tumor.

To grow, glioma cells need access to nutrients in the blood supply, and it is known that gliomas travel along blood vessels within the brain. Now, researchers in the lab of neuroscientist Harald Sontheimer, Ph.D., professor in the UAB Department of Neurobiology, have discovered that, as they move, gliomas dislodge astrocytic endfeet, which play a critical role in regulating blood flow in the brain.

Astrocytes are star-shaped cells in the brain that surround blood vessels and connect to them through projections called endfeet, which extend from the astrocyte and latch onto the vessel wall. The surface of nearly every blood vessel in the brain is covered by endfeet, which regulate the smooth muscle cells on the walls of blood vessels. Through that connection, instructions can be given to the muscle cells to constrict the blood vessel and limit blood flow, or dilate the vessel and increase blood flow.

Sontheimer, director of the UAB Center for Glial Biology in Medicine, says that, as a person performs different neurological functions, blood flow needs to be increased to the areas responsible for that function and correspondingly decreased in other areas to maintain balance.

The arrival of a glioma cell changes all that.

“Glioma cells traveling along blood vessels literally cut the connection of astrocytic endfeet with the vessels and push them out of the way,” said Sontheimer. “By disrupting this important neural connection, adverse cognitive effects could be expected. Additionally, our study showed that gliomas then take control of the blood vessels for their own ends. And those ends are primarily to obtain nutrients from blood so that they can continue to grow and spread.”

Sontheimer’s team says the glioma cells tend to congregate at blood vessel junctions, almost as if camping alongside a stream where it joins a river. The ready supply of nutrients would allow the cell to grow into a larger tumor mass.

By traveling on the outside of a blood vessel, glioma cells are able to access nutrients from the blood stream. As a side effect to that process, they damage the blood brain barrier. The barrier, a layer of endothelial cells, protects the brain by restricting passage of harmful substances from the blood stream into brain tissue.

“We found that, when gliomas push away the astrocytic endfeet, damage occurs to the integrity of the endothelial cells that make up the blood brain barrier,” said Stefanie Robel, Ph.D., a postdoctoral researcher in Sontheimer’s lab and co-first author of the study. “The barrier becomes weakened, and begins to leak. A leak across the barrier can cause severe damage to brain tissue.”

“That leakage appears to be a consequence of glioma cells’ migrating along the blood vessels in their search for nutrients,” said Stacey Watkins, an M.D./Ph.D. student in Sontheimer’s lab and co-first author. “When glioma cells contact the vessels, they have direct access to nutrients.”

But amid the deleterious effects that Sontheimer’s team observed — shearing away the endfeet from their blood vessels, disrupting normal brain activity, hijacking control of blood vessels and causing leaks in the blood brain barrier — he says there may be a silver lining. The idea that gliomas cause the blood brain barrier to become porous and leak might open up a new avenue to kill the malignant cells as they migrate.

Chemotherapy, usually delivered intravenously, is not considered an effective strategy for killing gliomas. Chemotherapeutic agents are very effective in killing cancer cells elsewhere in the body, but the predominant belief is that such drugs will not pass the blood brain barrier and thus will not reach their target.

“Chemotherapy is typically not tried in cases of glioma until after other therapies such as surgery and radiation have been employed,” Sontheimer said. “Our findings, which suggest that gliomas actually weaken the blood brain barrier and cause leakage, might indicate that high-dose, intravenous chemotherapy used early on following a diagnosis of brain cancer would be beneficial.”

The study, funded by the National Institutes of Health and the American Brain Tumor Association, was conducted on a clinically relevant mouse model of human malignant glioma.

Sontheimer says logical next steps would be to further examine the cognitive impact of severing the astrocytic endfeet connection to blood vessels.