Does this trunk make me look fat? Overweight zoo elephants no laughing matter

by Bob Shepard
UAB nutrition scientists launch an intriguing study of inflammation, obesity and infertility in African elephants in U.S. zoos, a study that may have an impact on the survival of the species. 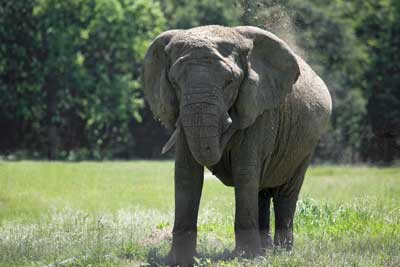 African elephants in captivity are getting fat. While the thought of a pudgy pachyderm might produce a chuckle, it is a situation with potentially serious consequences for the species.

“Obesity affects about 40 percent of African elephants in captivity,” said Daniella Chusyd, M.A., a doctoral student in the University of Alabama at Birmingham Department of Nutrition Sciences. “Much as we see in humans, excess fat in elephants contributes to the development of heart disease, arthritis, a shorter lifespan and infertility.”

Infertility is the aspect that may be most troubling to Chusyd and colleagues. Nearly half of zoo African female elephants exhibit abnormal ovarian cycles, which is strongly correlated with a high body mass index, said Chusyd. According to a 2011 report by scientists at the Lincoln Park Zoo in Chicago, zoos in the United States need to average about six births each year to maintain a stable elephant population. But the current average is only around three births a year.

“Low birth rate is connected to abnormal ovarian cycles in elephants and virtually all large mammals, including humans,” said Tim Nagy, Ph.D., professor in the UAB Department of Nutrition Sciences and Chusyd’s mentor. “At the current birth rate, the findings of the Lincoln Park Zoo report suggest that the African elephant could be gone from U.S. zoos within 50 years.”

With elephants in the wild continually threatened by diminished habitat, ivory hunting, war and political instability, zoos may provide the last bastion for preserving the species, said Chusyd. To better understand the link between obesity and infertility in zoo elephants, she has launched a study looking at body composition and inflammation in these animals.

“In humans, inflammation is a common feature in the effects of obesity such as heart disease and infertility, and we know obesity leads to a chronic state of inflammation,” she said. “What we don’t know is the relationship in elephants between inflammation and obesity with abnormal reproductive function.”

UAB, particularly Nagy’s laboratory, is internationally known for studies of the effects of body composition and obesity. Nagy is a senior scientist and Chusyd a predoctoral student in the UAB Nutrition Obesity Research Center. Chusyd’s project to assess female African elephants in U.S. zoos is funded by the Eppley Foundation for Research and includes collaborators at the Smithsonian Conservation Biology Institute, the University of Aberdeen and the Chinese Academy of Sciences.

Her analysis, measuring total body water using a stable isotope called deuterium and mass spectroscopy, will determine the amount of lean tissue versus the amount of fat tissue in these elephants.

“It’s difficult to gauge obesity in an animal as large as an elephant,” said Nagy. “The gold standard is a body condition score based on visual assessment, which is very subjective. This study will give us a much more reliable measure to determine which of these animals are obese.”

Chusyd said comparison of the obesity measure against whether the elephant maintains a regular ovarian cycle will shed important information on the link between fertility and obesity and could suggest strategies to reduce obesity and increase fertility.

“It may be that zoos will need to rethink how they house and feed elephants to reduce the incidence of overweight,” said Chusyd. “And not just elephants, as we hypothesize that a relationship between obesity, inflammation and infertility is present in many large mammals, including other imperiled African animals such as the rhinoceros and the gorilla.”

The test is easily done, said Chusyd. It is based on two simple blood samples, and zoo workers who are accustomed to working with the animals will conduct the blood draws and provide the samples to Chusyd for analysis.

For her, this project blends her passion for African animals with her career goals in nutrition science.

“I developed a profound respect and admiration for these animals while engaged in research in Tanzania following undergraduate school,” she said. “And I’m fascinated by the role of obesity on human and animal health. There are similarities between obese animals and obese humans in terms of onset of puberty, onset of menopause and overall life span, among other variables.”

Chusyd will test the validity of the deuterium measurement on a male elephant in the Birmingham zoo this summer. Data collection at U.S. zoos should get underway by fall.