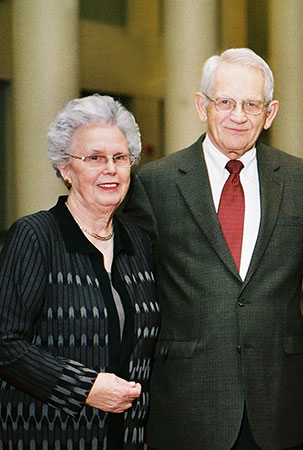 Sara and Wayne FinleyThe Finley name will soon grace an endowed scholarship in the School of Medicine and be added to a University of Alabama at Birmingham library in recognition of innumerable contributions to the field of genetics and UAB, and years of generous support for the institution, by Wayne H. Finley, M.D., Ph.D., and his late wife, Sara Crews Finley, M.D.

The creation of the first medical genetics program in the southeastern United States is just one of the many lasting marks from the Finleys’ more than three decades of work and dedication at UAB. The Finley family’s continued impact on the university comes in the form of a $3.4 million gift from Dr. Finley and his children, Sara J. Finley of Nashville and Randall W. Finley, M.D., of Birmingham.

To honor her legacy, the Sara Crews Finley, M.D., Leadership Scholars Program has been established to recognize and support the aspirations of top students. The endowed fund, in the UAB School of Medicine, will be awarded annually to one third-year medical student who has excelled in academics, leadership, integrity and service. The recipient will be eligible to receive the full cost of tuition and books for the final two years of medical school.

“My mother was a highly respected leader — personally and professionally,” said Sara J. Finley. “We felt that a leadership scholarship in medicine was the most appropriate way to recognize her enduring legacy.”

Dr. Finley was not only a visionary, but also a devoted mentor. As a member of the medical school admission committee for 20 years, she advised hundreds of applicants seeking careers in medicine. She was the first female president of the University of Alabama Medical Alumni Association and the Jefferson County Medical Society.

It is in her spirit that the scholars program has been established to recognize and support the aspirations of current and future students who will become leaders and mentors to generations of physician-scientists at UAB and beyond.

“Adding the Finley name to the library and establishing the scholarship will honor the Finley legacy on our campus now and in the future,” said Shirley Salloway Kahn, Ph.D., senior vice president of Development, Alumni and External Relations. “This generous gift will have an invaluable impact on the university, our students and the field of medicine. Adding the Finley name to the library directly reflects Dr. Wayne Finley’s passion for medical history, and creating the scholarship speaks to Dr. Sara Finley’s commitment to supporting our top medical students.”

Located on the third floor of Lister Hill Library of the Health Sciences, the Reynolds-Finley Historical Library will now bear the name of Wayne H. Finley, professor emeritus in the Department of Genetics at the UAB School of Medicine, in recognition of his contributions to the growth and development of the library’s collection of 13,000 rare books and manuscripts pertaining to the history of medicine and science. The Finley name will also be added to an endowment for the continued enhancement and expansion of the collection.

The Reynolds-Finley Historical Lectureship is an endowed support fund used to bring scholars of national stature to campus.