Putting Nest to work: How a new cloud computing system could turn anyone into a tech entrepreneur

by Matt Windsor
The Aura cloud computing system, designed by UAB computer scientist Ragib Hasan, Ph.D., could turn the Internet of Things into the Internet of Cha-ching. 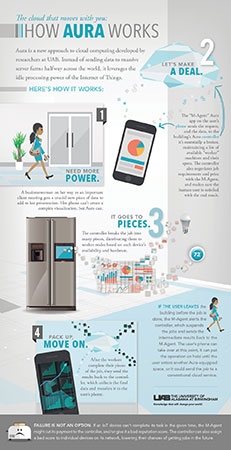 Click to enlargeThat Nest thermostat on your wall could be making you money. Not saving money, mind you. That’s its day job: learning your habits so it can fine-tune your energy use and lower your power bills. But most of the time, it’s just sitting there with nothing much to do. Add in some code written by a group of UAB computer researchers, however, and that Nest — along with all the other smart refrigerators, TVs, light bulbs, sensors and more that make up the Internet of Things — could be helping traveling businesspeople crunch data, tourists Photoshop their vacation snaps, and more.

The system, known as Aura, is the brainchild of a UAB team led by Ragib Hasan, Ph.D., assistant professor in the UAB College of Arts and Sciences Department of Computer and Information Sciences, and director of the SECRETLab research group. Aura pools the unused processing power available in Web-linked devices like the Nest, the poster child of the new Internet of Things (IoT) age.

Aura is designed to connect dozens or even hundreds of these devices into a localized cloud service for customers in need of additional computer horsepower. In addition to the extra processing muscle, those customers would keep their data nearby, instead of broadcasting it to mammoth data centers around the world.

My own private cloud

“With Aura, the building becomes an extension of the mobile phone’s processor and memory,” Hasan explains. “It doesn’t matter that the phone has a weak processor and limited memory — we can do most of the computation on the IoT devices in the building. It doesn’t matter that the phone has limited memory, because it now has access to a vast amount of memory belonging to the IoT devices.”

In other words, Hasan says, “Aura allows us to create powerful desktop-level apps to run on mobile phones, something that is not currently possible.”

Imagine an account executive arriving at her client’s offices, only to come across a new piece of data that would be perfect for her presentation. With only an iPhone handy, she doesn’t have the processing power to recalculate her complex spreadsheet. But “with Aura, she could offload this calculation to a secure, local cloud, and get a response quickly,” says Hasan.

Why would IoT device owners want to take part? Money, of course. Customers would pay a fee for the service, and device owners would be compensated based on the processing power they contributed to the operation. (See “How Aura Works.”) Hasan first described Aura in a presentation at the IEEE Mobile Cloud conference in San Francisco in March. (Read their paper here.)

Aura is not limited to buildings, Hasan adds. “We can think of Aura as a system for building local ad hoc clouds anywhere.” As you are driving down the Interstate, your phone can tap into the computing capabilities of your own car, plus all the surrounding cars.

From Amazon to Aura

Aura was inspired in part by the origin story of Amazon Web Services, the runaway leader in the cloud computing business. Back in the mid–2000s, Amazon was confronting a design challenge familiar to physical retail giants like Walmart: You need to have enough capacity to meet peak demand, even if that only occurs a few times per year. That’s why the parking lots at Walmart stores are built so they are big enough to handle the Black Friday and Christmas rushes, even though they will be mostly empty for the rest of the year. For Amazon, it meant the company had to have enough computer servers to handle the flood of traffic at Christmas and other big shopping times. But for most of the rest of the year, those machines were underused.

So, in 2006, Amazon launched Web Services, which rents out the company’s unused server space to all comers, including giants such as Netflix, Time Inc, and Pinterest, along with huge numbers of tech startups. It now earns Amazon billions: $1.57 billion in the first quarter of 2015, for example.

Hasan wanted to do the same with the unused processing power latent in IoT devices such as the Nest, LED lightbulbs that can be controlled by smartphone, in-car Web apps and more. A current report from tech giant Cisco Systems estimates there are already 18.2 billion IoT devices on the market, and the technology research firm Gartner predicts that there will be 26 billion such devices in operation by 2020 — four times the total number of smartphones, laptops, tablets and traditional computers.

“In any urban environment,” the UAB researchers, led by Hasan and graduate students Mahmud Hossain and Rasib Khan, write in the paper they presented at IEEE Mobile Cloud, “there will be thousands of such devices, with current estimates of 1,000 to 5,000 trackable devices around a given user.” These devices have strong processors and memory to spare. The Nest, the researchers point out, has a 1 GHz ARM Cortex A8 CPU, enough power to “support a significant value chain above and beyond its current use cases given the extra capabilities inherent in the system.” 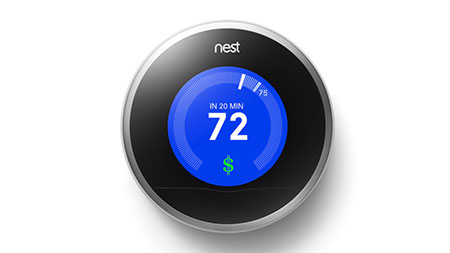 The price is right?

For Aura to succeed, it must offer customers the pay-as-you-go flexibility of contemporary cloud services, while offering device owners suitable compensation for use of their machines.

The Aura provider, Hasan explains, would “act as an intermediary and hold the payments in escrow until both parties are satisfied with the completion of a task.” Building managers and other business owners would have another incentive to take part. “Why do so many people prefer to hang out at Starbucks? A major reason is the free WiFi,” Hasan says. “Starbucks provides a service of value to customers. As we make buildings Aura-capable, businesses in these buildings will have an added advantage.”

In a proof-of-concept test, the UAB team successfully created a version of Google’s widely used MapReduce framework — the essential program that efficiently breaks down one big job into thousands of smaller ones for computation, then reassembles the results into a single answer — to ContikiOS, an operating system used by many IoT devices.

This early stage work, funded in part by grants to Hasan from Google and the National Science Foundation, was conducted with virtual devices. Hasan is now seeking funding for large-scale testing with hundreds of actual IoT devices in his research space at UAB’s Facebook Suite.

One problem that will get plenty of scrutiny in these tests is data security. “Communicational security is ensured via various security protocols,” Hasan explains. “Additionally, Aura incorporates a container-based segregation of the tasks running on the IoT devices to protect the core functionality of the devices. The distributed task assignment model also allows the system to ensure that any ill-motived device owner cannot obtain any holistic view of the original data and results.”

The collaborative cloud vs. the big data cloud

Aura offers the same flexibility and scalability as traditional clouds, yet in a highly localized computing environment. It can also be deployed to existing devices with “minimal additional expense,” the researchers say. But Amazon has mega-sized data centers spread out in 11 locations around the world. Your data has to travel a long way. For certain applications, such as “highly interactive, time critical services, especially for mobile clients,” as the researchers say in their paper, a cloud that is physically near you, and can move with you, would bring optimal performance.

Aura isn’t looking to put Amazon out of business. “IoT clouds may be the clouds of interaction, work offload, user experience, and collaboration,” the researchers write, “whereas data center clouds will continue to do the large scale big data analytics, HPC, and multi-tier business applications.” Even better, Aura can follow users from point to point, always ready when they need it.

With access to Aura, developers can create more complex mobile apps, Hasan adds. Ultimately, he says, it could also power a “truly ‘smart’ city where where every building or other physical infrastructure is capable of running computations, with new innovative applications such as secure supply chains, trustworthy location proofs, crowd-sensing, city-wide anomaly detection, and disaster-time localized computing support.”