A product designed by UAB engineers to help save lives during natural disasters is approved for use.


As the year draws to a close, UAB News looks back at some of the top stories of 2015. See them all here.

With the 2011 Alabama tornado catastrophe still lingering in the minds of many, University of Alabama at Birmingham research has led to the creation of new technology designed to help save lives in a natural disaster.

In June, UAB’s tornado panels designed to protect against flying debris were installed as an integral component of a safe room in a new construction home in the Montgomery, Alabama area.

Uday Vaidya, Ph.D., professor and chair of UAB’s Department of Materials Science and Engineering, worked with Storm Resistant Systems and Cooper Structural Engineers to scale the panels for use in this home. The safe room is designed in accordance with FEMA standards to withstand 250 mile-per-hour winds, and was built to remain intact even if the house were destroyed during a strong storm, keeping its occupants from harm.

The UAB panels were approved by the National Storm Shelter Association to hold up against an EF5 tornado.

“To see panels pass our most extreme test the first time is very impressive,” said Larry Tanner, P.E., manager of the NSSA/Texas Tech Debris Impact Test Facility. “This material is lightweight and sustainable and looks to have a bright future in the storm-shelter industry. If it saves even one life, it will have been worth the effort to design it.”

The composition of thermoplastic and fiberglass resins and fibers used in the panels are stronger per-unit density than the steel used in many current shelters and weigh 80 percent less, Vaidya says. Some of the same foams and fibers are used in the latest armored military vehicles.

The team working on the safe room developed a steel frame that holds the panels, and the frame can be broken down and carried into a closet or bathroom door and then reassembled. This prototype is the first of its kind, and it can be replicated for installation in other homes. 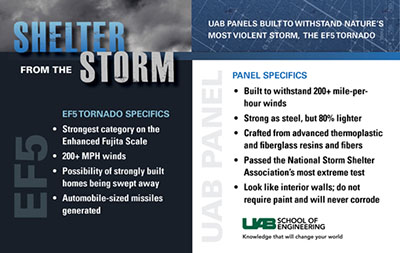 The panels, secured to each other and the floor of an interior room, protect against flying debris and are designed to keep people from being crushed or becoming airborne.

“With an average of more than 1,000 tornadoes recorded in the U.S. each year, it was crucial that something be done to make homes more safe,” Vaidya said. “Those tornadoes result in approximately 80 deaths and 1,500 injuries each year. Our goal was to develop new technology that would help protect individuals against the impact of debris during natural disasters, and I think with these panels, we’ve done just that.”

“The UAB panels are unique in comparison to the other products I’ve seen used in that they are lightweight, similar to plywood, but they have the strength equivalent to steel,” said David Cooper, P.E., S.E., president of Cooper Structural Engineers. “The ease of getting them in and out of a home for installation combined with the strength is what makes these panels a step above other products on the market.”

This installation comes after four years of research, testing, approvals and manufacturing, following the 2011 Alabama tornado outbreak. Following the devastation of those storms, Vaidya and his team of UAB engineers focused their attention on the development of a material that could transform any room into a safe haven.

“2011 happened, and the work we were doing, we saw had a lot of applications for tornado-related activities,” Vaidya said. “During a tornado or hurricane, you get a lot of two-by-fours flying in a home; a lot of debris is picked up, and it can actually penetrate inside a house. People die from the debris that comes through the walls or other things, so we built panels that would resist the debris completely.”

The panels leave the assembly line looking like typical interior walls; they do not require paint and will never corrode.

“The surface could be made to look really any way you want,” Vaidya said. “They could be tailored in any way a homeowner is interested in, and could be integrated into a room in an existing home or brought in as part of new construction.”

Made from discarded liner once used to wrap offshore oil-rig pipes, the panels also embrace green engineering techniques. Recycled materials used in the experimental phase kept thousands of pounds of waste from landfills.

Moving forward, UAB will work with contractors and engineers seeking to integrate the panels into new construction as well as make them available to individuals who would like to purchase the panels to be retrofitted into existing homes.


For individuals and businesses interested in learning more about the panels, contact UAB’s Material Processing and Applications Development Center at mpad@uab.edu.