by Bob Shepard
UAB and Auburn will team up for a study of magnetic resonance imaging techniques that could enhance epilepsy surgery. 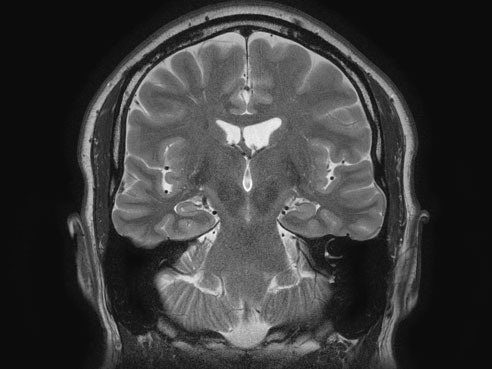 An MRI image showing the hippocampus of a patient with epilepsy.A $2.6 million, five-year grant from the National Institutes of Health will allow researchers at the University of Alabama at Birmingham and Auburn University to see whether a newly developed magnetic resonance imaging technique will provide more detailed images of the brains of epilepsy patients.

One of the keys to the study will be to see whether the new technique will allow less powerful but more available 3 tesla — or 3T — MRI machines to produce images as clear as the more powerful but fairly rare 7T MRI machines.

“Most MRI machines used for clinical imaging have a field strength of 3T or less,” said Lawrence Ver Hoef, M.D., associate professor in the UAB Division of Epilepsy in the Department of Neurology and principal investigator of the new study. “UAB has several 3T machines, and they are fairly common in hospitals and clinics throughout the state. There is only one 7T machine in Alabama, located at Auburn University, and there are less than 20 in North America.”

The more powerful 7T machines can produce more detailed images, but they are expensive and difficult to use. Due to these limitations, 7T machines are used primarily for research, not clinical care, according to Thomas S. Denney Jr., Ph.D., director of the Auburn University MRI Research Center and a co-investigator.

“The overarching goal is to see whether we can create images on a 3T machine that are as good as or better than we can achieve with a 7T machine, and we anticipate this study will help us verify this new approach,” Denney said.

MRI images are used frequently in epilepsy care. Surgery to remove small sections of the brain responsible for causing seizures is a highly specialized, tailored procedure, and physicians need precise imaging to determine which patients are good candidates for surgery and to minimize unwanted side effects. UAB is the only institution in Alabama that offers epilepsy surgery.

“The hippocampus in particular is a frequent locus for seizures, and it is a most difficult area to image with fine detail,” Ver Hoef said. “There is often a loss of clarity of the internal structures of the hippocampus with traditional MRI. Diagnosis is difficult if not impossible without clear images.”

Previous research done in Ver Hoef’s lab developed a new technique for MRI imaging of the hippocampus referred to as high-resolution, multiple image co-registration and averaging. This technique produces image resolution on a 3T machine that could previously be done only with a 7T machine.

“By altering some parameters and using conventional techniques in an unconventional way, we were able to develop a method for capturing high-resolution images that clearly and consistently visualized the internal architecture of the hippocampus,” he said.

Now, Ver Hoef and his collaborators at Auburn will test the new method by performing MRI imaging on 40 epilepsy patients using the new technique with the 3T MRI machines at UAB and comparing the results to those gained by traditional images from the 7T machine in Auburn.

“If we can show that we can get suitable images from the 3T machines, then we will have a significant improvement in the ability of MRI images to aid in pre-surgical evaluation of these patients,” Denney said. “If it doesn’t work, we reinforce the argument that the field needs more 7T machines for clinical use, which is an expensive proposition.”

A second aim of the study will be to see whether changes in the hippocampus could serve as a biomarker for the disease. Using the 3T and 7T machines, the investigators will test two groups of subjects, one with epilepsy well-controlled through medication and one with poorly controlled epilepsy, to see whether differences in the image clarity of the internal architecture are predictive of more severe disease.

In collaboration with Farah Lubin, Ph.D., associate professor in the UAB Department of Neurobiology and co-investigator of the new study, a third aim will attempt to see if the investigators can identify an epigenetic biomarker that could help in the future diagnosis of epilepsy. Epigenetics refers to genetic changes not encoded in DNA, but caused by external, environmental factors. Biomarkers are detectable, measurable signs that can be used to diagnose or treat disease.

Ver Hoef says the lack of definition seen in the hippocampus may be the result of astrogliosis, an increase in glial cells called astrocytes, which enlarge and proliferate when nearby neurons die through excitotoxic injury, one of the hallmarks of temporal lobe epilepsy. The researchers will study the brain tissue removed from the hippocampus during epilepsy surgery and compare it to the MRI brain images.

“We anticipate that there will be enhanced astrogliosis in certain layers of the hippocampus in those patients,” Ver Hoef said. “We will collaborate with Dr. Lubin, to measure epigenetic gene regulation and protein levels in the cells within these layers. No one has ever done layer-specific measurements of this type in epilepsy patients before.”

“We will look for correlations between what Dr. Ver Hoef sees on MRI images and what we find in our analysis of brain tissue,” Lubin said. “The hope is that, by employing clinical observation and imaging with laboratory analysis, we will be able to identify and confirm the presence of a biomarker that could provide valuable information for future diagnoses.”

“This is really an exploratory aim of the study,” Ver Hoef said. “Dr. Lubin will try to determine whether there is evidence of epigenetic changes and whether those changes will serve as a biomarker. If we get to a point where we can treat disease by restoring epigenetic balance, this may allow cells to heal themselves, which would be an exciting prospect in the treatment of disease.”

The study is a collaboration of the Alabama Advanced Imaging Consortium, of which Auburn and UAB are founding members. The AAIC promotes collaboration, project management and support between the major research centers in the field of imaging in Alabama.