A group from UAB engineering will serve as one of 16 contractors competing for upcoming space station delivery orders.
Written by: Katherine Shonesy
Need more information? Contact us 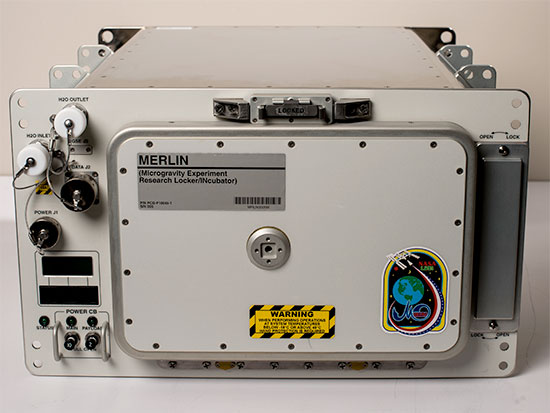 MERLIN, an example of a device UAB has previously designed for the ISS, is a refrigerated incubator that provides a thermally controlled environment for scientific experiments.The University of Alabama at Birmingham Engineering and Innovative Technology Development research group was recently announced as a partner in a $500 million contract issued from NASA’s International Space Station Program Office.

The Research, Engineering and Mission Integration — or REMIS — contract was awarded to Teledyne Brown Engineering with EITD listed as a partner on the project.

“This is similar to some other contracts we’ve had in that NASA will issue task order requests, and we will submit proposals for the tasks that fit our areas of expertise,” said Lee Moradi, EITD director and professor of mechanical engineering. “The funding that comes to UAB will depend on which jobs our team is included on over the length of the contract, which is five years with a two-year option.”

REMIS is an Indefinite-Delivery/Indefinite-Quantity contract and has a total of 16 contractors competing on the upcoming delivery orders.

While EITD is just one part of a larger team included in the contract, EITD already has an established relationship with NASA through several contracts for ISS-related projects, including design and maintenance of a series of transportable freezer units, design of a permanent orbiting set of freezer units, and development of technology for rapid-freezing of scientific samples in orbit.

According to the contract announcement from Teledyne Brown Engineering, “The number of experiments on the ISS is expected to grow considerably with a commercial approach enabled by this contract, to assist NASA in achieving its mission more quickly and affordably.”

Projects that EITD could potentially work on given the group’s areas of expertise include the following contract line items: