by Alicia Rohan
An amateur collector donates fossils, leading to the discovery of a new ancient sea turtle species. 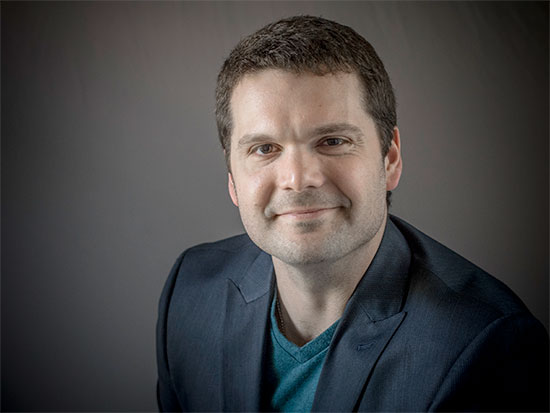 Drew GentryA new species of extinct sea turtle, Peritresius martini, has been discovered, according to a University of Alabama at Birmingham study. The fossils of P. martini fill in a significant gap in the lineage leading to modern sea turtles by serving as an important missing link that directly ties together living and extinct species.

The PLOS One study shows that P. martini lived between 70 million and 73 million years ago near the end of the time of dinosaurs in the late Cretaceous period. During the late Cretaceous, southern Alabama was covered by a shallow, inland ocean that stretched across most of modern-day North America.

“This discovery answers several important questions about the distribution and diversity of sea turtles during this period of time,” said Drew Gentry, lead author of the study and doctoral student in the UAB College of Arts and Sciences. “It provides further evidence that Alabama is one of the best places in the world to study some of the earliest ancestors of modern marine turtles.”

These fossils possess qualities found only in sea turtles from the late Cretaceous and also exhibit features resembling those found in more recent fossil species. Measuring over 4 feet in length, P. martini was roughly the same size as the Chelonia mydas, an adult green sea turtle commonly seen in the Gulf of Mexico near the Alabama coastline.

The turtle species discovered in Alabama is named for amateur collector and retired USDA soil scientist George Martin, who found the fossil in Lowndes County, Alabama, and donated it to the Alabama Museum of Natural History in Tuscaloosa, Alabama.

Amateur fossil collectors like Martin help paleontological researchers piece together the larger picture of the biological history of those areas. 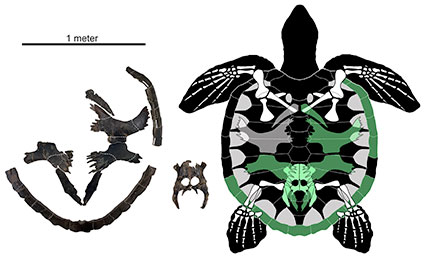 A new species of extinct sea turtle, Peritresius martini“Professional paleontologists often spend a great deal of time in laboratories performing the in-depth research necessary to properly study extinct species,” said Gentry, a graduate teaching assistant in the UAB Department of Biology. “Almost every paleontologist would love to spend more time in the field looking for fossils. But, without people like George Martin, many of the most significant fossil specimens ever found in Alabama would still be buried in the dirt.”

For more than a decade, Martin has donated to museums in Alabama, Florida and Mississippi and the American Museum of Natural History in New York.

“Finding this fossil turtle was largely happenstance as I stopped to look at the rock strata exposed by the stream,” Martin said. “I found a fragment of the turtle shell embedded in the marl and returned to the spot several times over the next year to recover fragments of the turtle as they were uncovered by the stream.”

Known from only a partial shell and pelvis, a great deal of information about P. martini is still a mystery.

“Without a skull or any of the rest of the skeleton, we don’t really know much about how this species would have moved, what it ate or how it lived,” Gentry said. “The only way to answer these questions is by finding more complete specimens.”

The study, “A new species of Peritresius Leidy, 1856 (Testudines: Pan-Cheloniidae) from the Late Cretaceous of Alabama, USA and the occurrence of the genus within the Mississippi Embayment of North America,” was co-written by James Parham, Ph.D., a paleontologist at California State University, Fullerton; Dana Ehret, Ph.D., a paleontologist at the New Jersey State Museum; and Jun Ebersole, director of Collections at the McWane Science Center.