Heads up: UAB does first-ever study of spectator injuries at sporting events

by Bob Shepard
Car and motorcycle racing lead the way in spectator injuries, according to UAB orthopedic surgeons, who published the first study in the field. 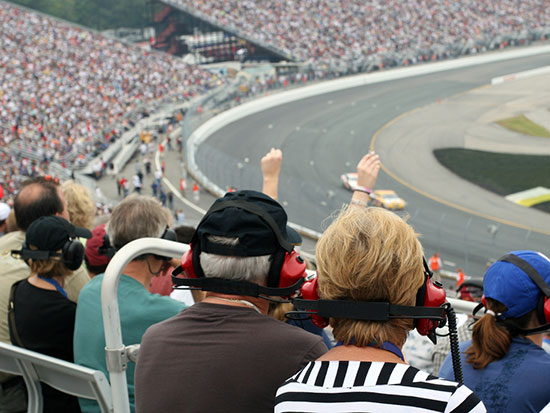 Injuries are part of the game. That is a common refrain in sports, usually referring to the athletes. But sometimes, it is the spectators who get hurt.

“You don’t expect to be injured when you attend a sporting event as a spectator,” said Amit Momaya, M.D., a sports medicine orthopaedic surgeon in the Department of Orthopaedic Surgery at the University of Alabama at Birmingham. “You certainly don’t expect to die, yet there are any number of cases where spectators are injured, some fatally, at sporting events.”

The results of that search are now published in the Journal of Sports Medicine and Physical Fitness. The research team, Momaya and Brent Ponce, M.D., Will Brabston, M.D., Heath Hale, M.D., Kennieth McCollough, M.D., and Reed Estes, M.D., combed two scholarly databases, PubMed and Embase, for studies on spectator injuries. They used a popular internet search engine to find incidents of injury. They found that spectator injuries are not common, but they do occur and can be life-threatening and life-changing.

Looking back to 2000, the team tracked 181 spectator injuries, with the vast majority – 123 – coming from automobile or motorcycle racing. Cycling experienced 25 injuries, cricket 12, baseball 10 and hockey eight. The team documented 62 fatal injuries; 38 from vehicle racing, 17 from cycling, four from hockey, two from baseball and a single fatal injury from cricket.

“Most of these injuries are ballistic in nature, meaning the spectator was struck by something from the playing area, such as a ball, puck or vehicle,” Momaya said. “There are also instances in sports such as cycling or basketball where a competitor might inadvertently leave the playing area and make contact with spectators.”

Momaya and colleagues are calling for a central database for recording the occurrence of injuries to spectators during sporting events. A database would provide the information needed to gauge whether spectator injuries were increasing or decreasing and could provide insight into whether protective measures instituted by sporting organizations were effective.

“For example, Major League Baseball recently increased the area covered by netting to reduce the risk of fans being struck by foul balls,” Momaya said. “Without a systematic way to record injuries, there is no way to measure whether that effort is sufficient or if netting should be extended.”

The research team says the findings point to some obvious measures that could be implemented, such as impenetrable barriers at racing events that prevent vehicles or crash debris from entering the spectator area. Increased use of netting at baseball stadiums and higher, transparent barriers in hockey arenas could prevent balls and pucks from striking fans.

“Cricket venues tend to lack protective netting and barriers, which places spectators at increased risk of injury from balls hit into the viewing area,” Momaya said. “Cricket venues should follow the changes implemented by Major League Baseball with extended netting to protect spectators from injuries with high speed balls.”

The authors also noted that the majority of injuries at cycling events were due to impacts between spectators and vehicles other than the competitor’s, including a publicity caravan, security motorcycle and a tanker truck. There were also instances in motor racing where support vehicles were involved in spectator injuries.

“This suggests that factors such as crowd control, event planning and staff training also play important roles in spectator safety,” Momaya said. “In addition to protecting spectators from injury due to the sport, attention should be given to all components of the event to ensure that sports fans can safely enjoy their experience.”

Momaya acknowledges that there are challenges to an international database, requiring the coordination of multiple governing bodies across multiple countries. Additionally, sporting organizations would need to agree on the threshold of what is considered an injury.

“There is a fine line between an enhanced fan experience on one hand balanced against spectator safety on the other,” Momaya said. “As a physician, I think safety is the top priority. We need to categorize these injuries and use that data to find tangible ways to protect fans without significant compromise to the viewing experience. Spectator injuries, be they life-ending or life-changing, have no place in sport.”