Surviving gameday: Tips to help you make it through the season

by Adam Pope
The boys of fall are back, but how your team fares this season could be the least of your worries.

Summer as we know it is over for many of us, and with that comes the kickoff of the college and professional football season.

Fans will experience highs and lows, the thrill of victory, and the agony of defeat. But, University of Alabama at Birmingham experts say there are other things fans should be aware of during football season — their health and safety. Here is a gameday survival guide to help ensure your well-being during the season. 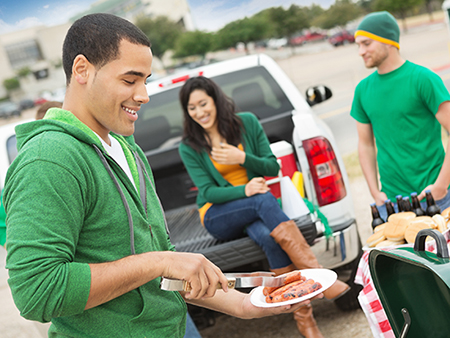 Thornton says that when people consume food in a short period of time, they may not realize exactly how much they have eaten and may not have allowed that food to properly digest.Tailgating

Good times during football season often begin with tailgate parties. Tailgating typically involves overeating grilled foods, as well as quick and easy finger foods. Fortunately, there are many nutritious and tasty meats, sides and snacks to choose from. Riley Thornton, RDN, a wellness specialist with UAB Employee Wellness, says a few strategies can go a long way when it comes to utilizing moderation.

Before arriving at the tailgate, Thornton says, many people save up room to conserve calories before a big day of eating, much like with holidays. She says that, rather than skipping meals, choose a light breakfast that incorporates fiber — oatmeal with berries — to help you feel more satisfied and not starved.

“It’s important to know the difference between feeling satisfied and feeling stuffed,” Thornton said. “Pay close attention to your hunger cues, and monitor whether you’re eating out of accessibility or out of hunger. Listen to your body, and walk away from the table when you first feel satisfied, rather waiting until you feel stuffed.”

Thornton also says people should survey before they serve themselves, explaining that this may cut down on overconsuming foods they may not have intended to choose. She says that, when people consume food in a short period of time, they may not realize exactly how much they have eaten and may not have allowed that food to properly digest.

Some healthier options for your tailgate spread might include:

The excitement of football, and even the activities and feelings of anticipation leading up to games, can be unhealthy in ways many do not realize, according to Jody Gilchrist, a nurse practitioner at UAB’s Heart and Vascular Clinic.

Critical matchups, tight games and crushing defeats provide heightened sensory inputs that trigger sympathetic responses and the release of adrenaline, which can reduce blood flow to the heart and other muscles and increase heart rate and blood pressure.

Chronic high levels of stress hormones lead to higher heart rates and higher blood pressures that over time tend to cause the heart to thicken, just as any other muscle would in response to heavy workloads.

“The body doesn’t distinguish between ‘bad’ stress from life or work and ‘good’ stress caused by game-day excitement,” Gilchrist said. “It impacts your health either way.” 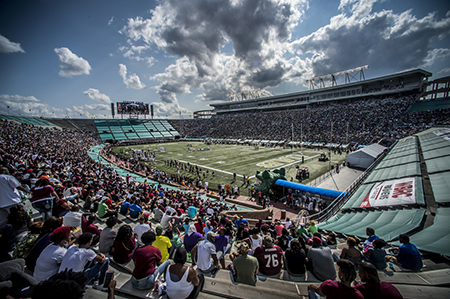 UAB doctors say it is important to recognize that if one’s body temperature is 105 degrees Fahrenheit or greater, this is a heatstroke — a life-threatening emergency.Beat the heat

For those who live in warmer climates, tailgating and football games can be extremely hot events lasting into October or November. Parents, teenagers and children will spend hours on end outside and may not be aware of their immediate needs, like rehydrating, reapplying sunscreen, or general sun and heat safety.

“It is important for the child or adolescent and parents to know the signs and symptoms of overheating that can happen quickly,” Coyne-Beasley said. Signs include:

Whether out at the lake or pool, on the sports field during practice, or just out for a walk in the neighborhood, Coyne-Beasley notes, it is important to recognize that, if one’s body temperature is 105 degrees Fahrenheit or greater, this is a heatstroke — a life-threatening emergency.

Thornton adds that people should stay hydrated, especially with water.

“Drinking water is the best way to stay hydrated, and on warmer tailgating days, there may be a tendency to not drink enough,” she said. 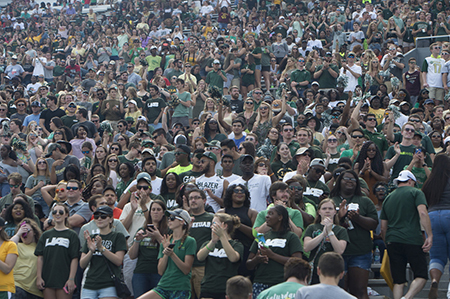 The boys of fall are back, but how your team fares this season could be the least of your worries.Enjoying the experience safely

One of the biggest challenges for fans can be arriving to and leaving the stadium safely. UAB crime prevention specialist Tonya Webb says fans traveling to and from the game should be aware of their surroundings.

“Fans should walk in groups to stay safe,” she said. “They should also park in well-lit areas and be cautious of their surroundings. We recommend using the buddy system because, at sports events, you’re often interacting with a massive group of people from various backgrounds, originating from various locations.”

Webb says it is especially important to utilize the buddy system when taking trips to the bathroom or to purchase food.

“Keep in mind that you’re in an open area, and it’s always safety in numbers when attending any large-scale event,” she said. 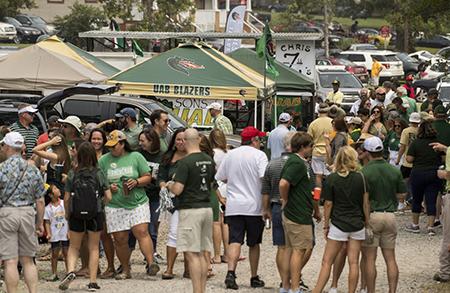 One of the biggest challenges for fans can be arriving to and leaving the stadium safely.Stay weather-aware

UAB Director of Emergency Management Kyle Boyett says lightning kills two or three Alabamians each year, and several others are injured from strikes. Just this past weekend, six people were injured by lightning strike debris in Atlanta at a PGA golf tournament. Fans who sit on metal bleachers in outdoor stadiums are at high risk for lightning strikes.

“Every thunderstorm contains this potential killer,” Boyett said. “Whether it is the large, springtime severe thunderstorm or the more common afternoon summer variety, that electrical charge — which may reach 100 million volts — is always present and searching for the path of the least resistance to complete the circuit. It might strike you, an isolated tree or an object in the open. Keep in mind that you do not have to be standing directly beneath a cloud to be zapped.”

Boyett says if you are outdoors and cannot seek shelter in a large building or house:

To chug or not to chug?

It is no secret that with football season comes gratuitous alcohol use. Most professional stadiums and recently some college football stadiums allow the purchase of alcohol during games. But before and after the clock hits zero, many fans may not know their limit.

Researchers estimate that each year 1,825 college students ages 18-24 die from alcohol-related unintentional injuries, including motor vehicle collisions. About 20 percent of college students meet the criteria for an alcohol use disorder.

“Alcohol abuse, binge drinking in particular, is thought to be a rite of passage for college students; but in reality it’s a very serious health epidemic in the United States,” said Peter Hendricks, Ph.D., associate professor at the UAB School of Public Health Department of Health Behavior. “It is important to understand what alcohol is, why it’s problematic and what a person can do to minimize the risk should they choose to drink.” 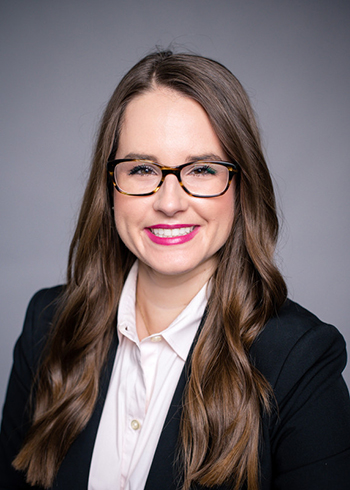 Megan McMurray, Ph.D.Megan McMurray, Ph.D., a clinical psychologist with the Department of Physical Medicine and Rehabilitation, notes that drinking alcohol in excess is dangerous and can quite easily lead to death. Overdose of alcohol can occur when a person has blood alcohol content sufficient to produce impairments that increase the risk of harm. Age, drinking experience, gender, the amount of food eaten and even ethnicity can influence BAC. Critical signs and symptoms of alcohol poisoning include:

“As BAC increases, so does alcohol’s effects and the risk for harm,” McMurray said. “Even small increases in BAC can decrease coordination, make a person feel sick and impair judgment. This can lead to injury from falls or car crashes, leave one vulnerable to sexual assault or other acts of violence, and increase the risk for unprotected, unintended intercourse.”

McMurray explains that, when BACs get even higher, amnesia or blackouts occur. If a person has signs of alcohol poisoning, it is very dangerous to assume that an unconscious person will be fine by “sleeping it off.”