Tips from the front lines: Coping with ADHD in the classroom

For teachers and parents of a child with ADHD, the beginning of school leads to new challenges and opportunities for learning.

As a new school year approaches, an estimated 55 million children will return to classrooms, and some of them bring a diagnosis of attention-deficit/hyperactivity disorder (ADHD) with them. For teachers and parents of a child with ADHD, the beginning of school leads to new challenges and opportunities for learning. 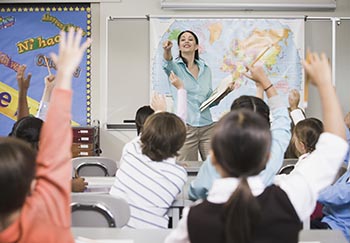 “ADHD is a common neurobehavioral disorder that affects 6 percent of school-age children,” said Laura Montgomery-Barefield, M.D., associate professor of child and adolescent psychiatry at the University of Alabama at Birmingham (UAB). “As children and teens return to class, it is important to reassess the need for new strategies at home and school.”

ADHD is usually first diagnosed in childhood and often lasts into adulthood, according to the Centers for Disease Control and Prevention (CDC). Children with ADHD may have trouble paying attention or controlling impulsive behaviors without regard to consequences, or they may be overly active. The CDC says the reported rate of ADHD in Alabama is among the highest in the nation, and that the rate of diagnosis nationwide increased by 22 percent between 2003 and 2007.

Montgomery-Barefield suggests that parents and teachers should work together to create an ADHD-friendly study environment at both home and school.  This can include introducing good study skills and time management techniques.

She says medication management is an effective treatment for ADHD.  As students get older, medication regimens may need to be adjusted to include coverage for homework.

“As with any chronic condition, it is important to partner with a child psychiatrist or pediatrician to ensure that your child receives the best treatment,” she said. “And get feedback from teachers.”

Angela Walker, an elementary school principal in Shelby County and a doctoral candidate in early childhood education at the UAB School of Education, has studied coping strategies for students with ADHD.

“During my research, I really came to feel that ADHD is not so much a disorder as it is a different way of learning,” Walker said. “Students with ADHD need hands-on learning, as well as physical and intellectual engagement.  We know that all kids benefit from student engagement, but it is essential for kids with ADHD.  They require this kind of approach in order to learn.”

Walker reports that her survey of 109 elementary teachers in a suburban Alabama school district identified nine strategies that teachers said were the most effective tools to manage a child with ADHD.

The most effective was to  call the student by name, touch the student, use a private signal word or simply move closer to the student. Eighty-three percent of teachers thought this strategy was effective at least 75 percent of the time.

The other most effective techniques were praising any effort in waiting for turns (78 percent effective); giving verbal compliments for improved work or behavior (77 percent); teaching activities that encouraged active response such as talking, moving, organizing or working at the board (74 percent); and allowing the student to sit closer to the teacher (72 percent).

“The most effective strategies seem to have a theme of praising and engaging students,” said Walker. “That appears to be a really effective combination.”

Other successful strategies Walker reported were asking a student to explain back to the teacher their understanding of directions (66 percent); allow directed movement in the classroom or change in seating that is not disruptive (62 percent); allow standing during seatwork – especially at the end of a task (60 percent); and giving the child an activity reward such as running an errand, cleaning the room or organizing the teacher’s desk (60 percent).

Walker suggests that parents and caregivers can reinforce these strategies at home to create a unified environment.

“It is important to note that with appropriate medical treatment and in an appropriate learning environment, ADHD students usually excel and rise to their academic potential,” said Montgomery-Barefield. “ADHD is only a disability when treatment is inadequate.”