by Jim Bakken
Flu season can peak as early as December, so now is the time to protect against it by receiving a flu vaccine. Find out what UAB doctors say is important to know. 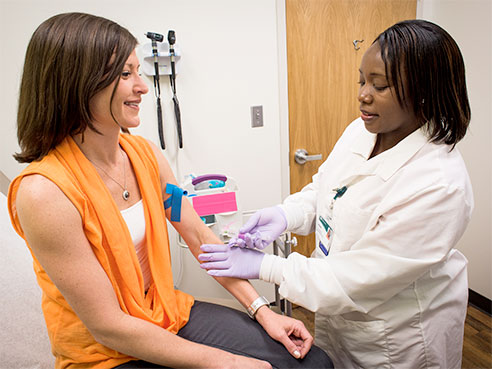 Despite infectious diseases like Ebola and enterovirus D68 garnering a lot of attention this year, doctors at the University of Alabama at Birmingham say influenza remains a greater threat in the United States.

With one simple step, they say, flu is one virus that can be protected against.

Stephen Russell, M.D., associate professor in the UAB Division of General Internal Medicine and lead physician at the UAB Medicine Leeds Clinic, says the medical concerns of 2014 reinforce the need for population health.

“What we are seeing is how important the U.S. public health system is and how important it is for patients to do what they’re able to do to keep themselves healthy and protected against diseases that can be quite serious,” Russell said. “With influenza, the most important thing a person can do is get a flu vaccine.”

It is estimated that 5-20 percent of the U.S. population gets the flu each year, and more than 200,000 are hospitalized from flu-related complications, according to the Centers for Disease Control and Prevention. Between 1976 and 2006, flu-associated deaths ranged from about 3,000-49,000 people each year.

“Many flu-related deaths are preventable if patients would just take the time to get a flu shot or spray to protect themselves and others from the spread of this virus,” Russell said. “Now is a great time to get vaccinated, as the season will likely peak between December and February.”

The CDC recommends a yearly flu vaccine for everyone 6 months and older. People 65 years and older, pregnant women, caregivers, and people with certain medical conditions including asthma, diabetes and chronic lung disease are especially encouraged to get vaccinated.

David Kimberlin, M.D., University of Alabama at Birmingham professor of pediatrics and president of the Pediatric Infectious Diseases Society, echoes the importance of the flu vaccine.

“All people 6 months or older in the United States should receive the vaccine unless their doctor says otherwise,” Kimberlin said. “The flu vaccine will save lives.”

Kimberlin says, no matter the outlook for a particular flu season, the recommendation to protect oneself must be followed, especially for the sake of children’s health.

“Parents should definitely follow CDC and American Academy of Pediatrics recommendations and have all children 6 months and older receive their annual influenza vaccine, as they are an at-risk population,” Kimberlin said. “We were seeing shortages around the United States delay the delivery of vaccine, so I encourage families to call ahead to their health care provider to ensure it is available.”