Nurse practitioners are a vital part of health care teams providing quality patient care in Alabama whose role has increased significantly over the past two decades, with the University of Alabama at Birmingham (UAB) School of Nursing on the forefront of this expansion.

With many of its faculty and alumni providing leadership and key insights, nursing leaders from the School have been instrumental in advocating for expanded scope of practice for nurse practitioners in the state and in helping to develop organizations and initiatives dedicated to this advocacy.

“Our efforts to improve access to primary care nurse practitioners for patients in Alabama have had a far-reaching effect,” said Dean and Fay B. Ireland Endowed Chair in Nursing Doreen C. Harper, PhD, RN, FAAN. “I am proud that so many from the UAB School of Nursing have worked so hard and contributed so much to effect change in our state and nationally.” 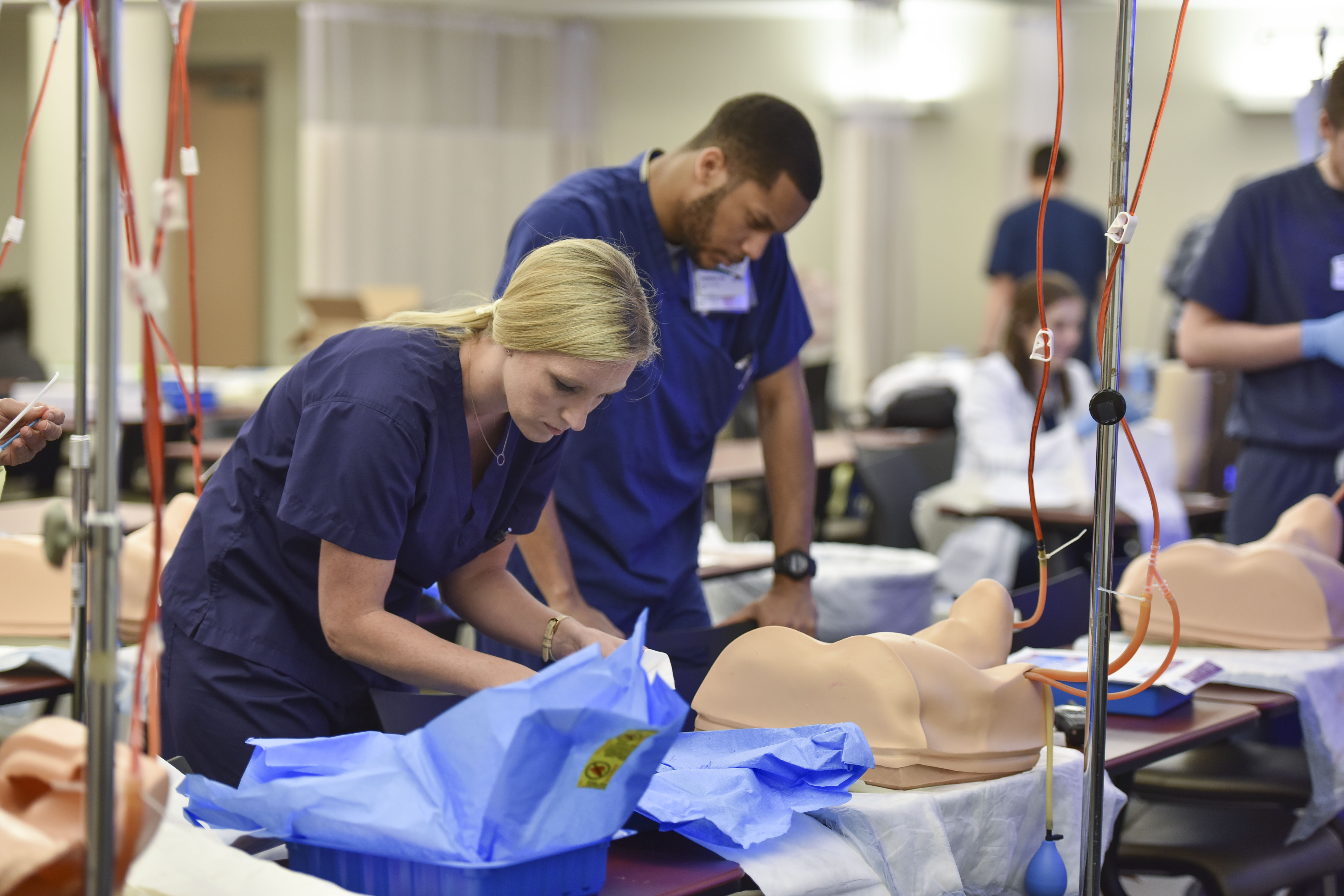 The UAB School of Nursing is proud of the part it has played in expanding the role of nurse practitioners in Alabama over the last two decades and equally proud of educating future nurse practitioners who will continue to lead this expansion.Assistant Professor Joy Deupree, PhD, MSN, RN, WHNP-BC, recalls the day in August 2006 when a meeting at the Civic Center in Fairfield, Alabama, significantly changed the path for nurse practitioners in the state. That day, approximately 150 people gathered and a steering committee was formed that eventually led to the creation of the Nurse Practitioner Alliance of Alabama (NPAA), an established voice to advocate for nurse practitioners and patients across the state.

Eleven years later, the Alliance counts more than 3,000 nurse practitioners across Alabama as its members.

“The work that has transpired since then is just amazing,” Deupree said, who earned her Bachelor of Science in Nursing (BSN) from the School in 1994 and her Master of Science in Nursing (MSN) in 1997. “I knew we needed to organize and have one voice as we advocated for increasing the scope nurse practitioner practice in Alabama. Since that day, the number of nurse practitioners in Alabama has grown exponentially.

“It is all about the patients and how we can improve access to care for them, especially in rural and underserved areas, and that is what we have done.”

Along with Deupree, retired Associate Professor Jean Ivey, PhD, RN, APRN, PNP-PC, alumna Cindy Cooke, DNP, FNP-C, FAANP, immediate past president of the AANP, alumna Nancy Turnham, DNP, FNP, NP-C, and Visionary Leader Jim Raper, PhD, CRNP, JD, FAANP, FAAN, are founding members of the Alliance. Cooke earned her DNP from the School in 2013 and Turnham her DNP in 2009. Raper, a Professor in the UAB School of Medicine, holds a primary faculty appointment in that school.

Deupree, who spent several years laying groundwork even before the Alliance was formed, says it has been worth all the time and effort.

“It’s been worth it because you see patients in rural areas who don’t have to drive three hours to get a tetanus shot or get a prescription for chronic pain that can be easily treated and managed by a nurse practitioner,” Deupree said. “I think nurse practitioners are a substantial component for team-based care in the state.”

Associate Dean for Clinical and Global Partnerships Cynthia Selleck, PhD, RN, FNP, FAAN, noted that many associated with the School are now having an impact at the national level as well.

“The UAB School of Nursing is highly visible in organizations such as the National Organization of Nurse Practitioner Faculties and their national conference each year,” Selleck said. “We are viewed by that organization as a top program in the country in the preparation of nurse practitioners.”


When she first went to work at UAB Hospital in the early 1990s, Meyer, a two-time graduate of the School and current Assistant Director of UAB Medicine’s Office of Advanced Practice Providers, recalls that “there were only a handful of nurse practitioners here.”

Now Meyer, who earned her Master of Science of Nursing (MSN) degree from the School in 1997 and her Doctor of Nursing Practice (DNP) in 2017, and Associate Vice President, Advanced Practice Providers Catherine Brown, CRNP, MSN, provide dedicated leadership to approximately 500 nurse practitioners serving in more than 60 unique service lines throughout the UAB Health System. Brown earned her Bachelor of Science in Nursing (BSN) from the School in 1995, her MSN in 1998 and is currently a student in the post-MSN to DNP Pathway.

According to Brown, UAB’s Office of Advanced Practice Providers, which helps grow service lines and individual practices, provides oversight and supervision of scope of practice, and supports recruitment, quality, credentialing and privileging, is currently the only one of its kind in Alabama.

“When we started, there were no real defined practice models for using advanced practice providers,” Brown said. “You just got thrown in the deep end of the pool and had to figure it out for yourself. Now we have defined practice models and a formal structure here at UAB for how to use this really strong workforce to the full extent of our licensure in the state, and it is working well.” 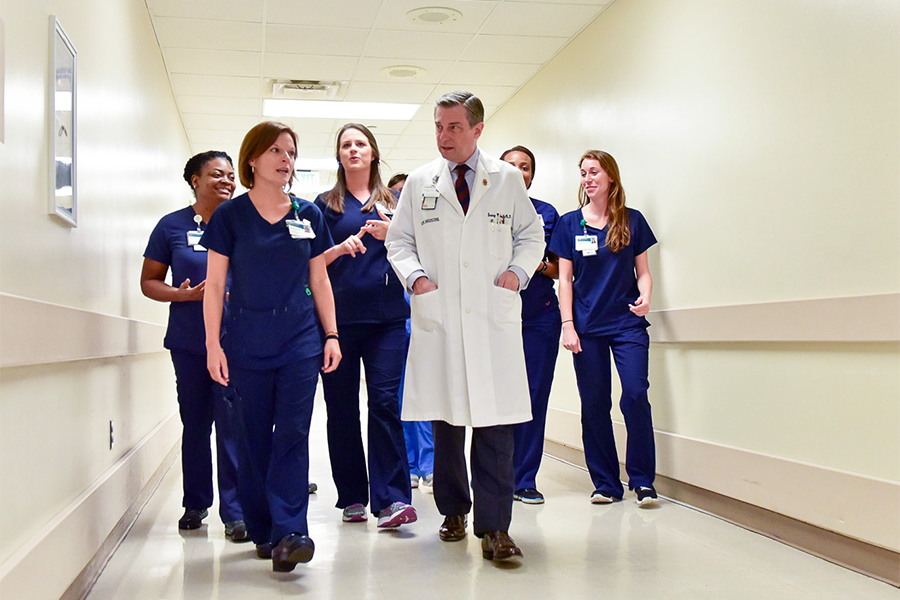 Physicians, administrators and many others across the UAB Health System have recognized the impact of nurse practitioners and begun advocating for them.The Office, which has been in place for two years, is also a key component of the UAB Nursing Partnership, a formal partnership between the UAB Health System, the School and UAB Hospital that aligns critical resources to provide outstanding patient care, invest in teaching and training for interprofessional collaboration, and partner in research and scholarship.

The elite collaboration, which places added emphasis on lifelong learning, professional development and innovation, especially in the areas of safety and quality, benefits UAB’s own nursing population and its patients, and enhances its standing as a champion of excellence in academic nursing and clinical practice nationwide.

Brown asked Shirey and Miltner to help her develop leadership training for her Advanced Practice Provider leads, a group of supervisors and managers who don’t get formal training in the area otherwise. The program they developed and instituted was received with great enthusiasm.

“They brought their expertise over to partner with me, and the feedback was phenomenal,” Brown said. “Everybody who participated felt like it was incredibly valuable. We did a survey, and the results were almost 100 percent positive. We take a lot of pride in that.”

Meyer credits Harper, UAB Hospital Chief Nursing Office Terri Poe, DNP, RN, NE-BC, and other UAB administrators, and its physicians with recognizing the impact of nurse practitioners and advocating for them.

“Dean Harper has helped create a bridge between the School and the Hospital,” Meyer said. “The people she has on her staff that we have been collaborating with extensively, like Joy Deupree and others, have been very engaging with us and vice versa. They have done a lot to incorporate us, and we have done a lot to incorporate them on our committees and in addressing practice issues. This collaboration has been highly successful.”


The School, which holds the highest overall national ranking in the state and is the most affordable highly ranked school nationally, has also led the way in increasing access to nurse practitioner care for medically underserved patients statewide through the administration of several important grants.

In 2017, the School received a two-year Advanced Nursing Education Workforce (ANEW) grant totaling more than $1.3 million allowing it to expand and enhance its commitment to increasing primary care for rural and medically underserved populations by integrating behavioral health care training into three existing and two new academic practice partnerships across the state.

“Increasing patient access to behavioral care through primary care in medically underserved populations is important because, in many instances, these patients are not receiving treatment for these issues,” said Assistant Dean for Graduate Clinical Programs and Associate Professor Ashley Hodges, PhD, CRNP, WHNP-BC, who serves as the ANEW grant’s program director. “We are pulling together all the resources from those avenues to continue leveraging these academic practice partnerships to the maximum.” 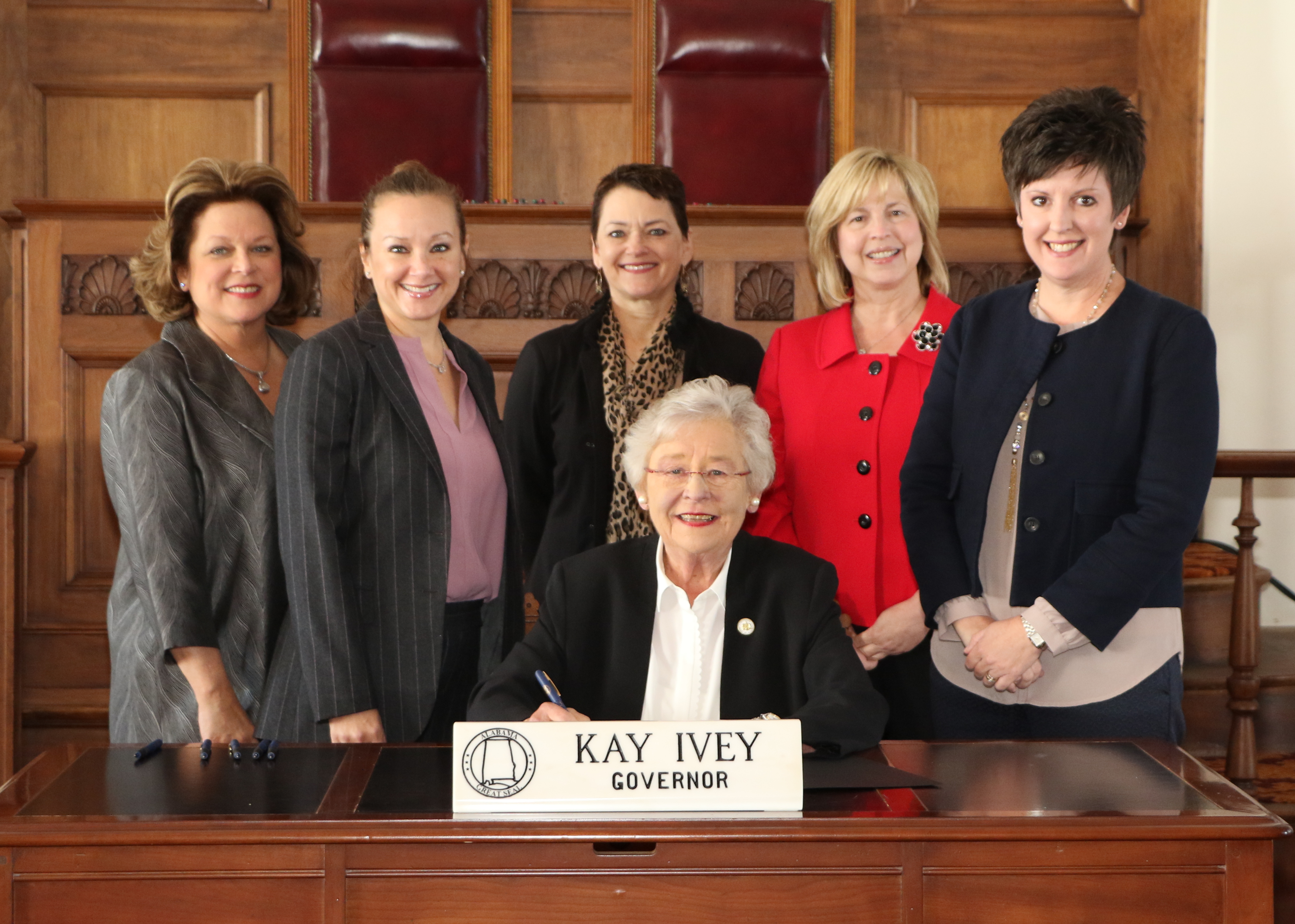 The leadership of the Nurse Practitioner Alliance of Alabama with Gov. Kay Ivey as she proclaimed Nurse Practitioner Week in Alabama.The School is also helping to train nurse practitioners though collaborative efforts with the UAB Health System and UAB Hospital in the HRTSA Heart Failure Clinic and the Providing Access to Health Care (PATH) Clinic.

The HRTSA Heart Failure Clinic is a nurse-managed, interprofessional transitional care clinic for heart failure patients recently discharged from UAB Hospital. The PATH Clinic is a nurse-managed clinic that utilizes an interprofessional, team-based model to provide diabetes care at no cost to uninsured patients recently discharged from UAB Hospital.

All of the School’s programs have experienced great success in terms of patient outcomes and in helping to create a sustainable pipeline of primary care providers to address health disparities in Alabama.

“We are excited to see an increased number of nurse practitioner graduates in primary care who want to go back to serve in their hometowns and other rural communities,” said Selleck, who sits on UAB Hospital’s Advanced Practice Providers Executive Council. “And of course, we always welcome more students and more providers and clinics who want to partner with us to continue to make a difference in Alabama.”

It has been coming for several years now, thanks in part to the efforts of Deupree and others who want to see nurse practitioners impact the state’s health care to the fullest extent possible. It is not lost on Deupree that just a few years back, receiving such a proclamation would not have been possible.

“Getting that proclamation from the governor each year says a lot about how far we have come,” Deupree said. “We still have work to do, but if we can continue to make the same strides we have over the past 15 years, Alabama could someday be a leader in the access to primary health care for all its populations.”