University of Alabama at Birmingham School of Nursing Professor Mirjam-Collette Kempf, PhD, MPH, has been named primary principal investigator of the UAB Women’s Interagency HIV Study (WIHS), formerly under the direction of UAB Center for AIDS Research Director Michael Saag, MD, and has received $2.8 million in additional National Institutes of Health (NIH) funding to continue impacting health care for women living with HIV in the Deep South, and nationwide, through 2018.


The grant was initially funded through Dec. 31, 2017, but the NIH announced it will extend the study for an additional year prior to an anticipated five-year renewal in 2019.


“This is a strong indication of the success we have had impacting the lives of HIV-infected women locally and across the nation through this grant,” Kempf said. “It has been a unique opportunity, especially in the South, and one for which we are grateful. We continue to provide a strong voice for this underserved population of women who had no one to speak for them before.” 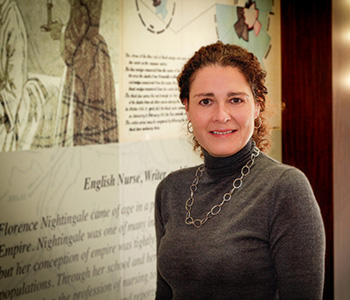 Dr. Mirjam-Colette KempfThe WIHS cohort was developed by the NIH in 1993 and is now the country’s largest and longest ongoing study of women living with HIV and those at risk for HIV infection. UAB joined the national network in collaboration with the University of Mississippi Medical Center (UMMC) in Jackson, Mississippi, in 2013 as part of a five-year, $8.15 million grant. Birmingham, Alabama, Jackson, Mississippi, Chapel Hill, North Carolina, Atlanta, Georgia, and Miami, Florida, were added as WIHS sites to focus more national attention on HIV-infected women in the South, where researchers said it was needed most.


The Centers for Disease Control and Prevention says the rate of adult and adolescent females living with diagnosed HIV infection in Alabama through the end of 2013 was 160 per 100,000 people. In nearby states, including Florida (348), Louisiana (298), Georgia (248) and Mississippi (225) the rate was even higher. By comparison, the rate in California was 88 and in North Dakota 16.


“Though the majority of women infected with HIV live in the South, there were none enrolled in the cohort up to 2013,” Kempf said. “The Women’s Interagency HIV Study needed to better address the problem at its epicenter, and it did so by adding the four Southern sites and Jackson, Mississippi, as part of our UAB site.”


After joining the WIHS cohort, the UAB-UMMC site was the fastest among the Southern sites to complete its enrollment and was subsequently asked to enroll additional women into the study. Each site currently has 115 enrollees, including 28 HIV-negative women at UAB and 29 at UMMC.


The work has strongly impacted HIV outcomes locally and nationally through research, data sharing and collaboration and greatly increased the standing of UAB and the UAB School of Nursing in the HIV research community.


“Researchers and students at the UAB School of Nursing and beyond are getting tremendous exposure to data and a vast network of investigators they otherwise wouldn’t have access to,” Kempf said. “We’ve recently received additional NIH supplements, which will allow us to determine cardiovascular and pulmonary disease outcomes. This has greatly increased interest from investigators outside the HIV field in joining our project.”


Kempf said, “What we have done with this grant in terms of collaborating across sites and the region truly reflects UAB’s overall mission to drive the national research agenda.”


She added that though Saag stepped down in July 2017 as principal investigator he remains a co-investigator on the grant.


The UAB School of Nursing is ranked 13th in overall graduate programs, among the top five public schools of nursing in the country by U.S. News and World Report, and offers innovative bachelor’s, master’s, and doctoral programs, including the state’s only PhD in Nursing degree. Based at the state’s flagship Academic Health Science Center with the third largest public hospital in the nation, the School is a leader in collaborative science and home to the state’s only nursing-specific research initiative with a diverse funding portfolio, including more than $9.7 million in NIH research funding, supporting scholarship in oncology, international nursing, HIV/AIDS, pediatrics, occupational health, and aging, among others.