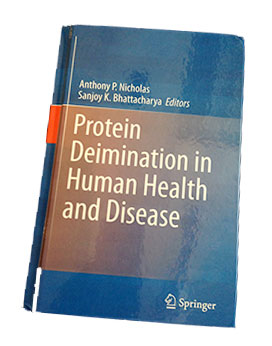 Anthony Nicholas, M.D., associate professor in the Department of Neurology at the University of Alabama at Birmingham, is a co-editor of the first textbook on the subject of protein deimination in human health and disease.

Authors for each chapter of the book, titled “Protein Deimination in Human Health and Disease,” are international experts from the United States, Canada, Europe and Asia.

The publisher, Springer Publishing, said “‘Protein Deimination in Human Health and Disease’ is the first publication to compile this knowledge and the growing amount of new information now known about the presence of deiminated proteins in the eye, skin, hair, gums, lungs and nervous system, as well. Chronicling the earliest studies of deimination up to the present, this volume distills what is currently known about citrullination of proteins in the human body and is the first book of its kind on the topic.”