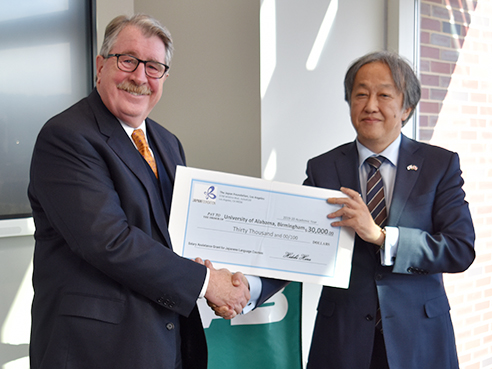 College of Arts and Sciences Dean Bob Palazzo, Ph.D., and Consul-General Kazuyuki TakeuchiUAB’s College of Arts and Sciences Department of Foreign Languages and Literatures received a $30,000 grant — its second — from the Japan Foundation Los Angeles to support Japanese language instruction on campus. The department first received funding from the foundation in 2018 to support two full-time visiting language instructors for two semesters.

More than 60 students are pursuing the Japanese minor at UAB, which is one of only four in the state and the only program in the Birmingham area. Studying Japanese at UAB enables them to attend cultural events on and off campus, study abroad in Japan for up to one academic year and learn alongside UAB exchange students from Japan or Japanese residents of the city. UAB plans to use this new funding to expand its course offerings and eventually establish a major concentration in Japanese.

“There is always demand to open more Japanese language courses in all levels at UAB,” said Yumi Takamiya, assistant professor in the department. “Because of the grant support, positive effects were observed this past academic year, and we are sure to continue growth in the future.”

Birmingham has a long partnership with Japan. Birmingham has called Hitachi, Japan, its sister city since 1982, and a 10-foot statue of Vulcan sits in a park that overlooks Hitachi. In 2017, Maebashi, Japan, became Birmingham’s second Japanese sister city. The Birmingham Botanical Gardens Japanese Gardens, officially opened by the Ambassador of Japan to the United States in 1967, feature traditional architecture and elements, and large stone lanterns, a gift from Hitachi, greet visitors at the Botanical Garden’s entrance.

The Japan Foundation Los Angeles promotes international awareness and mutual understanding between Japan and the United States through cultural exchange, programs and grants for introducing Japanese art and culture, support for Japanese studies and language education and Japanese publications and translations.

The Consulate-General of Japan is responsible for strengthening relations between Japan and the United States; the Atlanta consulate’s jurisdiction includes Alabama, Georgia and North and South Carolina.