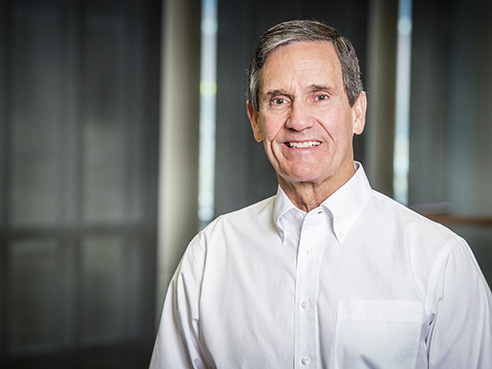 Associate Professor of Mathematics Loy Vaughan, Ph.D.It was spring 1993, and a blizzard had just hit Birmingham. It buried the city and surrounding neighborhoods so thoroughly, reported the Birmingham News, that an Irondale man, frustrated with the lack of snow-and-ice equipped vehicles needed to rescue people in need, “borrowed” a Humvee from the National Guard — without permission — which he was later compelled to return, much to Irondale officials’ chagrin.

The Comedy Club on Green Springs Avenue in Homewood burned to the ground before firefighters could arrive, and a bus full of Mountain Brook High School spring-breakers got stuck and spent the weekend at City Hall instead, alongside two older adults who elected to spend the night in a jail cell rather than their cold home.

And at UAB, remembers Associate Professor of Mathematics Loy Vaughan, Ph.D., the two feet of snow that covered campus shut the university down for a week, right in the middle of exams. That 1993 blizzard is the best example of something similar to the coronavirus pandemic Vaughan can remember.

“And that,” he said, “was easy to handle by comparison.”

Vaughan spent 50 years working at UAB in the Department of Mathematics and was honored in March at the annual Service Awards Program luncheon. During those five decades, Vaughan has seen quite a bit of campus: He and other members of the Department of Mathematics had offices or courses in eight buildings before landing in University Hall. The group first had offices in what is now UAB’s Administration Building — known at the time as the Central Bank Building, Vaughan says — and taught classes in Tidwell Hall, which sat where the Hugh Kaul Genetics Building sits now, and Cudworth Hall. Classes relocated in the 1970s to Building No. 1, now the Education Building, before moving to a now-razed apartment complex near where the baseball and softball fields sit. They then moved into what is now the WBHM building on 11th Street South between Fifth and Sixth avenues.

The next stop was a building on the now-razed 15th Street, which was cleared to make way for the Campus Green in 2007; they shared the space with the Department of Criminal Justice and a sandwich shop, Vaughan remembers. Then, in the mid-1980s, the math faculty moved into Campbell Hall, where they would remain for decades before relocating to the new University Hall in 2019. Vaughan elected to keep his office and classes in Campbell — he was on his way to retirement in January 2020, he says, so one more semester didn’t make much difference.

The many relocations are a good example of just how transitional Vaughan’s early years were in the department, he says — he was part of the core faculty who built the math program from the ground up.

“We had to develop our own math journal library for our research; we didn’t have the internet or anything like that. We started from scratch.”

Computers began entering the classroom in the late 1970s, and Vaughan led some studies using the Apple II to enhance learning in algebra courses, but Vaughan says “it was primitive by today’s standards” — standards that allow university instruction to take place entirely remotely in order to protect Blazers in the midst of the coronavirus pandemic.

During his time at UAB, Vaughan and others in the math department transitioned to including online instruction in their courses — he says that seeing the results for his 350-plus students’ online homework, quizzes and tests helped him better identify their needs.

“The data generated for each class allowed me to be more efficient in counseling those students who were underperforming,” he said.

Vaughan started teaching at 24 and remembers the early days when many of UAB’s students were nontraditional, going to school part-time or taking night classes to receive delayed degrees. Many were veterans returning from the Vietnam War.

“Half or more of the students in my classes were older than I was,” he remembered. “Now I get students coming up and telling me their grandfather was in my class in the ‘70s. It’s kind of amazing.”

Vaughan also remembers when UAB hired Gene Bartow in 1977 as its first head basketball coach and athletic director; several employees would play handball with the coach in the old Bell Gymnasium during Coach Bartow’s first year.

Being a Blazer became something of a tradition in Vaughan’s family, he says: His wife attended medical school at UAB in the early 1980s before much of today’s campus existed — when he realized several months ago she’d never seen the Campus Green, he took her on a tour — and his son and daughter also earned medical degrees from the university. Vaughan himself is a West End native, which he says means he’s seen first-hand the benefit UAB has had on the community.

“Having grown up in West End, we were only a few miles as the crow flies from the steel mills,” he remembers. “My mother had bad asthma, and the sky was always red. The air quality was horrible.

“Now, the steel industry has faded, and we’ve transitioned to becoming a center for medicine in the state — it’s the principal industry in Birmingham now. We joke that UAB stands for the ‘university that ate Birmingham.’ As the Grateful Dead put it: ‘It’s been a long, strange, trip,’ but satisfying and rewarding in every way.”