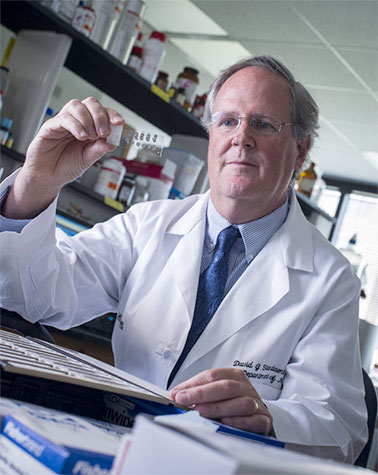 David Standaert, M.D., Ph.D., the John N. Whitaker Professor and chair of the UAB Department of Neurology.Though the drug levodopa can dramatically improve Parkinson’s disease symptoms, within five years one-half of the patients using L-DOPA develop an irreversible condition — involuntary repetitive, rapid and jerky movements. This abnormal motor behavior appears only while taking L-DOPA, and it stops if the drug is stopped. However, if L-DOPA is taken again, even many months later, it quickly re-emerges.

In research to prevent this side effect and extend the usefulness of L-DOPA — which is the most effective drug treatment for Parkinson’s disease — University of Alabama at Birmingham researchers have uncovered an essential mechanism of this long-term memory for L-DOPA-induced-dyskinesia, or LID.

They report a widespread reorganization of DNA methylation — a process in which the function of DNA is modified — in brain cells caused by L-DOPA. They also found that treatments that increase or decrease DNA methylation can alter dyskinesia symptoms in an animal model.

Thus, modification of DNA methylation may be a novel therapeutic target to prevent or reverse LID behavior.

“L-DOPA is a very valuable treatment for Parkinson’s, but in many patients its use is limited by dyskinesia,” said David Standaert, M.D., Ph.D., the John N. Whitaker Professor and chair of the Department of Neurology at UAB. “Better means of preventing or reversing LID could greatly extend the use of L-DOPA without inducing intolerable side effects. The treatments we have used here, methionine supplementation or RG-108, are not practical for human use; but they point to the opportunity to develop methylation-based epigenetic therapeutics in Parkinson’s disease.”

The research by David Figge, Karen Eskow Jaunarajs, Ph.D., and corresponding author David Standaert, Center for Neurodegeneration and Experimental Therapeutics, UAB Department of Neurology, was recently published in The Journal of Neuroscience.

Although studies of LID in animal models have shown changes in gene expression and cell signaling, a key unanswered question still remained: Why is the neural sensitization seen in LID persistent when delivery of L-DOPA is transient?

The UAB researchers suspected DNA methylation changes — the attachment of a methyl group onto nucleotides in DNA — because methylation is known to stably alter gene expression in cells as they grow and differentiate. Furthermore, methylation changes in neurons have been shown to be involved during the formation of place memory and the development of addictive behavior after cocaine use.

Figge and colleagues found that:

“Together,” the researchers wrote, “these findings demonstrate that L-DOPA induces widespread changes to striatal DNA methylation and that these modifications are required for the development and maintenance of LID.”