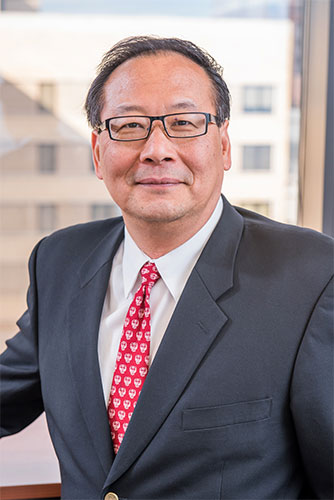 One sign of the clinical significance of this research by the University of Alabama at Birmingham investigators are the percentile scores that Jianyi “Jay” Zhang, M.D., Ph.D., and Gangjian Qin, M.D., received in those two NIH grant applications.

Zhang’s plan to dissect the mechanisms of electromechanical integration of a human heart-muscle patch to aid survival and stability of the patch garnered a 1 percentile score, the highest possible. Qin’s plan to dissect a novel molecular pathway in endothelial cells of arteries that appears to regulate contractile function and blood pressure has “significant potential to improve human health” from the disease and death caused by high blood pressure, NIH reviewers said, and Qin received a 2 percentile score.

Zhang came to UAB in 2015 from the University of Minnesota Medical School with the goal of moving his work with engineered heart patches into human use within seven years. As chair of Biomedical Engineering, a joint department of the UAB School of Medicine and the UAB School of Engineering, Zhang has recruited top researchers, and he also was awarded $11 million of NIH funding in 2016 — $8 million of which is shared in collaborations with University of Wisconsin and Duke University researchers.

At the time, Qin was interested in the often fatal heart failure that occurs months or years after heart attacks. He reasoned that growth of new blood vessels into the damaged heart tissue of the left ventricle could be boosted by altering the amounts of cell-cycle regulators in the E2F family of transcription factors, to speed division of cells in the endothelial tissue of arteries.

When he deleted one of the eight E2Fs that are found in mice and humans — E2F2 — it had no effect on cell growth. “But unexpectedly, we found a striking function,” Qin said. “If you delete E2F2, the vessel is more contractile. It becomes rigid and hard, and this contributes to high blood pressure.” 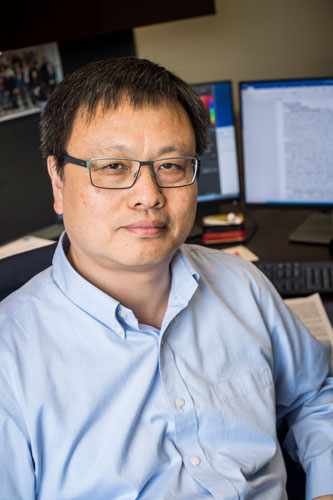 Gangjian Qin, M.D.“So we had a question: How does E2F2 interact with other molecules to regulate blood pressure?” Qin did pull-down experiments with E2F2, where other proteins are flowed past tethered E2F2 molecules to see if any would bind. He found that a kinase enzyme called Sam68 did bind to the transcription factor.

When he knocked out the gene for Sam68 in mice, they had low blood pressure.

Ultimately, a series of experiments in Qin’s lab and observations of other laboratories suggested a previously unknown mechanism of blood pressure control that involves E2F2/Sam68 and the expression of endothelial converting enzyme 1b. ECE-1b affects the levels of peptides that constrict blood vessels and raise blood pressure. Dysregulation of this pathway may contribute to blood pressure disorders, especially hypertension.

Despite a strong correlation, the E2F2/Sam68-ECE-1b pathway has not explicitly been linked to blood pressure regulation, and the mechanisms of how Sam68/E2F2 signaling regulates ECE-1b expression and blood vessel function remain uncharacterized.

Qin will use his new grant to search for the link to blood pressure regulation and characterize the mechanisms. His research could provide the missing links between the results of large-scale genomewide association studies of human high blood pressure and its pathogenesis — namely how dysregulation leads to refractory hypertension.

Detailed knowledge of those steps would offer new targets for potential new drugs, which are especially needed to prevent or treat resistant hypertension.

Qin says he was attracted to UAB by the strong focus of clinicians and basic scientists on solving the clinical problem of hypertension, as well as the depth and breadth of cardiovascular disease research in biomedical engineering, the UAB Department of Pathology and the UAB Division of Cardiovascular Disease. He also has great interest in Zhang’s research, where Qin’s past work in stem cell biology and cardiovascular science can contribute.

As measured by NIH funding, the UAB Department of Biomedical Engineering is the fourth-ranked biomedical engineering department among all departments that are jointly led by schools of medicine and engineering, according to the 2016 Blue Ridge NIH database.