'A river of trauma' leads to six Bronze Stars 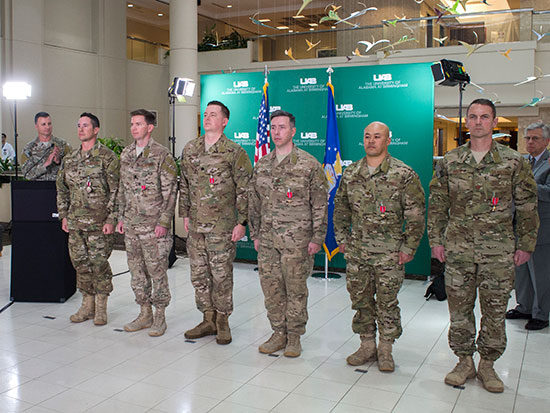 The UAB-based SOST team stand at attention after receiving their decorations during the ceremony at UAB Hospital.The brightly lit, inviting atrium of UAB Hospital is a far cry from the two-room, concrete-walled farmhouse in the Middle East where the United States Air Force Special Operations Surgical Team, based out of the University of Alabama at Birmingham, deployed in 2016. During their four-month tour at that casualty collection point, the team performed the deeds that brought their families, scores of UAB well-wishers and senior officers from the Air Force Special Operations Command to the atrium for a medal ceremony Feb. 13.

The six members of the SOST Gold Team were awarded Bronze Star Medals by the Air Force for their actions during that 2016 deployment.

A SOST is a team of active-duty Air Force medical professionals, including a trauma surgeon, emergency physician, nurse anesthetist, surgical scrub technician, critical-care nurse and a respiratory technician, who are charged with providing far-forward medical care during combat operations wherever the U.S. military is engaged.

“A SOST is a mobile surgical team with advanced medical and tactics training that can deploy to austere or hostile areas to provide surgical support,” said Lt. Col. Ben Mitchell, M.D., the leader of the UAB team. “Our mission is to provide early, potentially lifesaving surgery to wounded American military personnel or to the local population.”

In 2010, UAB became one of the first two civilian hospitals in the nation to host a SOST. The Air Force determined that, when not on deployment abroad, the teams needed to be stationed at a facility where they could best develop their medical and teamwork skills. 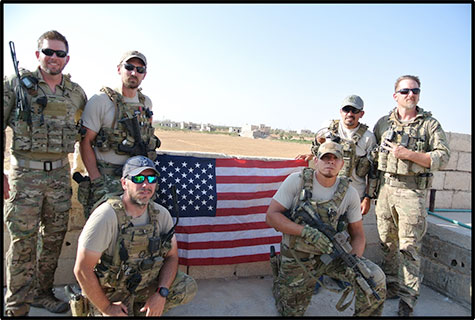 Lt. Col. Mitchell and his team deployed in support of Operation Inherent Resolve.“Military hospitals in the states typically don’t see a lot of trauma,” said Jeffrey Kerby, M.D., Ph.D., the director of the Division of Acute Care Surgery and the UAB Trauma Center. “For a medical team to keep their skills sharp, they need a more challenging environment.”

Kerby, who was an Air Force surgeon before joining UAB, is the conduit between AFSOC and the hospital.

“UAB is a good training ground,” Kerby said. “We are the only adult Level 1 Trauma Center within a 150-mile radius. We see a great many penetrating trauma cases here from gunshot wounds, stabbings or car crashes. Unfortunately, we are in a good place to hone trauma skills.”

The team members are fully accredited staff at UAB, treating patients in the emergency department, performing surgery and caring for those in intensive care units. In 2016, the UAB Gold Team deployed in support of Operation INHERENT RESOLVE, setting up at an austere, forward location that served as a collection point for injured local fighters.

“When we arrived on location, we basically were jumping into a fast-moving river of trauma,” said Lt. Col. Matt Uber, the team’s nurse-anesthetist. 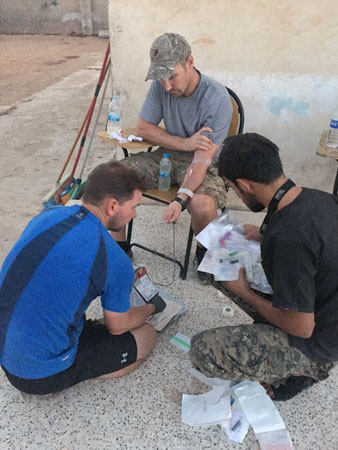 Team member Maj. Cade Reedy donated blood for one of his patients.There were some local medical personnel at the farmhouse, and some U.S . military medics, but no surgical capacity. As word spread of their arrival, the river of trauma began to flow.

“We had patients on-site within two hours of arrival at our location,” Mitchell said. “We treated more than 750 patients during our deployment, working 24/7.”

Mitchell, Uber and the rest of the six-man team experienced 19 mass casualty events — when the river of patients would have overwhelmed even a good-sized emergency department in the States. They performed 16 lifesaving surgeries, sometimes while mortar rounds whistled overhead. Supplies were limited. Capt. Cade Reedy donated his own blood for one wounded fighter, while Maj. Nelson Pacheco organized other locals to donate multiple units.

At times, the patients dramatically outnumbered the providers. Tech. Sgt. Richard Holguin established an airway on one casualty while single-handedly managing another patient’s chest injury.

For the first time ever in a forward wartime environment, Maj. Justin Manley performed a REBOA procedure, in which a balloon catheter is placed into a patient’s femoral artery. The balloon is inflated to stop severe bleeding. It is a difficult, even risky procedure; but it allowed the patient to survive until arrival at an operating room. The team used the same procedure three more times during the deployment, saving four patients who otherwise would not have survived.

Team members say the time spent at UAB when not overseas is important. Training and working together brings the team closer.

“It helps to really know and understand each member of the team — to know what they will do and how they will react to situations that arise,” Mitchell said. “We had some rough days during deployment, and you have to know that you can count on each other in those times.”

The six members of the SOST Gold Team were awarded Bronze Star Medals by the Air Force for their actions during that 2016 deployment.“We are adjuncts to the UAB staff, not replacements,” Mitchell said. “We train with our SOST teammates, but also work alongside the incredible medical professionals at UAB as much as possible.”

“It is gratifying to know that we can play a role in helping the team reach and maintain peak proficiency in their medical skills prior to a deployment, where those skills might be needed to save lives on a battlefield,” said Reid Jones, COO of UAB Medicine.

The team shares their experiences with their UAB counterparts in an exchange of learning that flows both ways.

“Most of the major, significant contributions in trauma surgery have been made during times of military conflict,” Kerby said. “This affiliation with the Air Force, tapping into their experience and their expertise, certainly has a positive impact on what we are trying to do at UAB as a trauma center. At the same time, their opportunity to work as a team, in a busy, high-volume trauma center, has a positive impact on what they are trying to accomplish.”

SOST members are involved in teaching residents and medical students at UAB through presentations and side-by-side training. The team has worked with more than 200 first responders on proper techniques for using tourniquets to stop bleeding after trauma.

“The tourniquet is a great example of how military medicine can change civilian practice,” Kerby said. “Tourniquets had fallen out of favor until recent battlefield experiences re-affirmed their utility in stopping major bleeds following severe trauma. SOST is now helping us re-introduce this lifesaving technique through our Stop the Bleed campaign.”

Kerby says the whole approach to resuscitation has been amended by military experiences. UAB has added REBOA to its array of available medical procedures, and the SOST’s use of whole blood transfusion might also have applications in civilian medicine.

“This is a win/win situation,” he said. “We help prepare them for their mission, and they come back with new ideas and new thinking that just might save lives in Birmingham, in Alabama and across the nation.”